To share your memory on the wall of Agnes Kolodziejczak, sign in using one of the following options:

Print
KOLODZIEJCZAK, Agnes – Mrs. Agnes Kolodziejczak passed away peacefully at The Village of Riverside Glen Retirement Home at the age of 96 on Tuesday, September 15, 2020.

Loving mother of Edward Kole (Darlene) of Ottawa and Julius Kol... Read More
KOLODZIEJCZAK, Agnes – Mrs. Agnes Kolodziejczak passed away peacefully at The Village of Riverside Glen Retirement Home at the age of 96 on Tuesday, September 15, 2020.

Loving mother of Edward Kole (Darlene) of Ottawa and Julius Kolodziejczak (Wendy) of Orillia and cherished Babcia of Holly and Ryan. She was predeceased by her dear husband Jozef Kolodziejczak. Faith and family were the most important elements in her life.

The family would like to thank the attendants at Riverside Glen and Dr. Ruddock for their excellent care of her over the last nine months. Special thanks to family friend Anna Sredzinski for her compassion and unwavering support in this difficult time.

Agnes was born on August 15th, 1924 in the village of Rymacze, Poland as Agnieska Matyszczuk. At the age of 15, at the beginning of the war in 1940, she was taken to Russia. From Russia, she went to Tehran and then on to Uganda at a Polish settlement named Koja, where she trained in hospital tasks. After the war, she was taken to Italy, France, Germany and then to Canada, where she worked under contract to the Homewood in Guelph. She lived in a dorm room there until she married Jozef and moved to Antigonish, Nova Scotia. It turns out that farming life was not for her, so she returned to Guelph with her husband in 1949 and worked at the Homewood until her retirement.

Receive notifications about information and event scheduling for Agnes Kolodziejczak

We encourage you to share your most beloved memories of Agnes Kolodziejczak here, so that the family and other loved ones can always see it. You can upload cherished photographs, or share your favorite stories, and can even comment on those shared by others.

Guaranteed hand delivery by a local florist
AS

Posted Sep 18, 2020 at 05:27pm
She was a kind hearted woman who never spoke ill about anyone. Agnes liked to repeat Jack Benny's famous saying, "I'm 39 again." when anyone asked her age. Over the years, she enjoyed going to many church events, such as breakfasts, picnics and bazaars. I will miss your smiling face and good hearted humour. 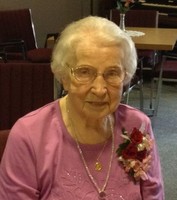 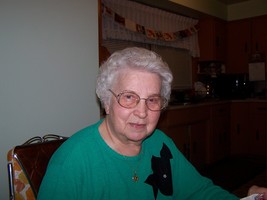 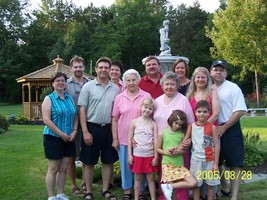