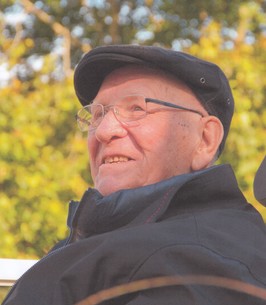 It is with a heavy heart and much love that we mourn the sudden passing of Aurele Marcel Thomas on January 28, 2022 at the age of 87. He is predeceased by his wife, Audrey Thomas (nee Stevens) 2012, and leaves behind his children Peter (Lydia), Judy (Ron) and Randy (Penny), his grandchildren Graham, Corey, and Jackie (Jamie) Little, Melissa (Greg) Anderson, Tyler (Donna) Lefebvre, Jessica (Dan) Ouimette as well as great grandchildren William, George, Arthur and Jasmine. He is the son of the late Baptiste and Yvonne Thomas and brother of Gerry (Bev), Paul (Madeleine), Willy (Sue), the late Muriel (the late Albert) Leacock, the late Blanche (the late Jean Louis) Guy, the late Frieda Lapierre, the late Solomon (the late Aline), the late Fred and the late Edmond. He will also be sadly missed by many nieces and nephews, many cousins and other friends and relatives.

Aurele worked at Abitibi in the core room until his accident in 1974 that put him in a wheelchair. Many might remember him back then as “Pop-a-wheely” on the CB radio. He enjoyed building things and kept busy in his garage making many potato boxes among other things over the years. Dad was a proud and stubborn man always wanting to take care of things like rigging things up to be able to snow blow the driveway! He was also a man with nine lives: his accident with the motorcycle, the moose, the bus, the elevator in the house and his bypass surgery to name a few. We were lucky to have him as long as we did. His last years were in Guelph at a retirement facility where he spent time writing his memoirs with the help of a friend, driving to visit with Peter and Lydia and to enjoy his backyard and doing puzzles and playing on his iPad. The family would like to thank the staff at Riverside Glen for the care given to him over the years. He truly enjoyed the attention he received from the staff.

A celebration of life will be held at a later date this year. If desired, memorial donations may be made in Aurele’s name to the March of Dimes or a charity of your choice. Donation cards are available at the Gilbert MacIntyre & Son Funeral Home, Dublin Chapel, 252 Dublin St. N., Guelph 519-822-4731 or leave condolences online at wwwlgilbertmacintyreandson.com