To share your memory on the wall of Mr. Benjamin Wilson, sign in using one of the following options:

Provide comfort for the family of Mr. Benjamin Wilson with a meaningful gesture of sympathy.

Ben was born September 14, 1937 in Toronto, Ontario. He began his career as a teacher in 1959. Two years were spent in Lahr, Germany (1976-1978) where he taught grade 8 on the Canadian military base. During that time, he and his family enjoyed travelling, good food and wine.
After Ben’s retirement in 1993, winters were spent in Sun Lakes, Arizona and summers at Mini Lakes in Puslinch.

Cremation has taken place. A celebration to commemorate Ben's life will be held at the Gilbert MacIntyre and Son Funeral Home, Hart Chapel, 1099 Gordon St., Guelph on Saturday, September 14, 2019 from 1:00 - 4:00 p.m. In memory of Ben, donations made to Hospice Wellington or the Kidney Foundation would be appreciated.
Read Less

We encourage you to share your most beloved memories of Mr. Benjamin Wilson here, so that the family and other loved ones can always see it. You can upload cherished photographs, or share your favorite stories, and can even comment on those shared by others.

Posted Sep 07, 2019 at 12:46am
It was such a pleasure to meet and make good memories with Ben and family while in Lahr, Germany. We also loved keeping in touch and having a few visits down through the years. Ben will be missed! Our condolences to Pat and family.
Love and hugs,
Frank and Joan Heyman.
Comment Share
Share via:

I am so sorry to hear of Ben’s passing. He and Pat were good friends of my parents when we were all in Germany. The Wilsons were our family away from home, us kids were all great friends too. Ben was always kind and thoughtful, a truly good man. My sympathies to Pat, Kathy, Colleen, Laurie and families. Andrea (Puddy) Campbell 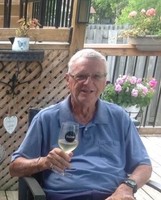