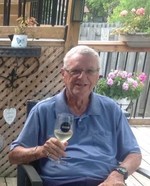 Ben was born September 14, 1937 in Toronto, Ontario. He began his career as a teacher in 1959. Two years were spent in Lahr, Germany (1976-1978) where he taught grade 8 on the Canadian military base. During that time, he and his family enjoyed travelling, good food and wine.
After Ben’s retirement in 1993, winters were spent in Sun Lakes, Arizona and summers at Mini Lakes in Puslinch.

Cremation has taken place. A celebration to commemorate Ben's life will be held at the Gilbert MacIntyre and Son Funeral Home, Hart Chapel, 1099 Gordon St., Guelph on Saturday, September 14, 2019 from 1:00 - 4:00 p.m. In memory of Ben, donations made to Hospice Wellington or the Kidney Foundation would be appreciated.