To share your memory on the wall of Colin Kelly, sign in using one of the following options:

Dr Colin Charles Kelly passed away peacefully, at the age of 86, at the St. Joseph’s Health Centre, Guelph on Sunday, November 3rd, 2019. Colin was a beloved husband of Chris Kelly for 63 years, the cherished fathe... Read More
KELLY, Colin Charles

Dr Colin Charles Kelly passed away peacefully, at the age of 86, at the St. Joseph’s Health Centre, Guelph on Sunday, November 3rd, 2019. Colin was a beloved husband of Chris Kelly for 63 years, the cherished father of Stephen Kelly (Sombath) and Julie Kelly (Tom Clark), and grandfather of Miranda and Cabrinha Clark. Colin was the brother of Audrey Hedgecock (predeceased) and Dorothy Withall from England.

Colin grew up in Maldon, Essex, where, despite the war, he had an active childhood, playing football (soccer) and acting in many school plays (playing Ariel, Macbeth and Hamlet). He served two years in England’s National Service and then received his teaching certification from Loughborough College. During this time, he played for Oxford City Football Club and was a member of the winning team of the AFA (Amateur Football Association) in 1955-56. Colin then became a teacher at Cheney Grammar School in Oxford. In 1969, Colin and Chris, with their two children, moved to Madison, Wisconsin where he attained a Masters Degree. Then, the Kelly family immigrated to Canada and Colin began working at the University of Guelph’s Athletic Department (Human Kinetics). He remained at the university until his retirement, with a one year pause when he attended the University of Illinois earning a PhD in the Sociology of Sport. At the U of G, Colin was best known as head coach for the Gryphon’s Soccer team over a 28 year period. In 1982, he received the Ontario Soccer Association President’s Award, in 1990 his team won the OUA soccer championship, and in 1998, he was inducted into the University of Guelph’s Hall of Fame. Colin was also a very active and contributing member of the Canadian Soccer Association, offering coaching clinics throughout the country, travelling widely, promoting the growth of soccer in Canada.

Outside of his work life, Colin loved to garden in the family’s country home, to travel, and spend time with his family, including a few very dear dogs.

Colin’s family wish to extend their greatest thanks to St. Joseph’s Hospital and Dr. Isla McPherson and the extraordinary care they provided for the last three and a half years.

A memorial service will be held at the Gilbert MacIntyre and Son Funeral Home, Dublin Chapel, 252 Dublin Street, North, Guelph on Saturday, December 28th, 2019 at 2:00 p.m. In lieu of flowers, memorial donations can be made to the Colin Kelly Men’s Soccer Scholarship at the University of Guelph. Online donations and condolences can be made at www.gilbertmacintyreandson.com.
Read Less

Donations are being accepted for: Colin Kelly Menâs Soccer Scholarship.

We encourage you to share your most beloved memories of Colin Kelly here, so that the family and other loved ones can always see it. You can upload cherished photographs, or share your favorite stories, and can even comment on those shared by others.

Posted Dec 29, 2019 at 05:40am
Thank you Christine for sending me Colin's obituary. I was so sorry to hear that he had passed on after being in the hospital for the last 2 years. 86 is a fine age to reach, and I was so glad you you had as much as 63 years together.
I only knew Colin really when I was a schoolboy, and Colin and three other lads used to come around to our house to play cards - often it seems in the garden at Hillyfield - on a Sunday morning. My parents were very fond of Colin and I know that you both kept in touch with Olive and Wilfrid in Maldon until quite recently . My thoughts are with you and your family - I remember Colin as quite a character with a great sense of humour, and I know that it will take you time to adjust to life without him. My condolences and very best wishes. Humphrey Berridge
Comment Share
Share via:

Posted Dec 27, 2019 at 11:31pm
Dear Chris, Julie and Stephen
I am so sorry for the loss of your husband and father. I am not able to attend the memorial for Colin but all of you are in my thoughts and prayers
All my love
Cathy McInnis
Comment Share
Share via: 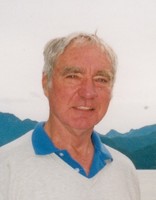