To share your memory on the wall of Mrs. Cynthia Folzer, sign in using one of the following options:

Provide comfort for the family by sending flowers or planting a tree in memory of Mrs. Cynthia Folzer.

Provide comfort for the family of Mrs. Cynthia Folzer with a meaningful gesture of sympathy.

Born in Evanston, Illinois, 23 August 1936. Died in Guelph, Ontario, 26 January 2020.
Beloved wife for 47½ years of George H. Renninger, of Guelph, who survives her. She is also survived by her sister, Sandra ... Read More
FOLZER, Cynthia Mae

Born in Evanston, Illinois, 23 August 1936. Died in Guelph, Ontario, 26 January 2020.
Beloved wife for 47½ years of George H. Renninger, of Guelph, who survives her. She is also survived by her sister, Sandra Marea Folzer of Chestnut Hill, PA, and nieces Amma, Laura and Victoria Napier and their children.

Cynthia earned a bachelor of science degree in chemistry from Purdue University, and taught at the University of Illinois, Chicago Campus. She resumed her studies at Rutgers University from which she received a PhD degree in inorganic chemistry. After coming to Guelph with her husband in 1972, she became a senior demonstrator in inorganic chemistry at the University of Waterloo, resigning that position at the end of 1990 to pursue her political, anti-war, and environmental activism. For a number of years, she was a member of the Raging Grannies, appearing with the group at numerous demonstrations. She served on a committee to assess possible new land-fill sites for Guelph. She was a lifetime member of the NDP.

During the last three or so years of her life, Cynthia suffered from a form of dementia, which together with ovarian cancer ended her life. She died peacefully mid-morning, Sunday, 26 January, at St. Joseph's Health Centre in Guelph. She requested no service or celebration of life after her death. Burial has taken place in Woodlawn Memorial Park in Guelph. Those wishing to remember her may do so by making contributions in her name to St. Joseph's Health Centre, to the Foundation of Guelph General Hospital, or to an environmental or peace organization of their choice. 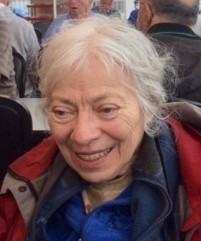 We encourage you to share any memorable photos or stories about Mrs. Cynthia Folzer. All tributes placed on and purchased through this memorial website will remain on in perpetuity for generations.

It is sad that Cynthia has passed. She cared so much about important causes and cared for us as well. Sincere condolences to George.
Comment | Share Posted Feb 17, 2020 at 09:28am via Condolence
TM

Thank you, Cynthia, for your contributions to academia and a just society. I am sure that the ripples you created will continue. Much love to the family

I’m sorry to hear that Cynthia died. I knew her and her family while growing up across a field from them and sharing a horse with her sister Sandy. I didn’t know about her political activism or that she was a runner like her Sandy. What most strikes me is the photo of Cynthia who looks so much like her mother, Betty! I remember everyone in the family as kind, intelligent, artistic and contributing to the greater good throughout their lives. It sounds like Cynthia contributed her best to many people and the environment.
Comment | Share Posted Feb 02, 2020 at 11:28pm via Condolence
LP

I remember Cynthia as community-minded, a strong and passionate advocate for the environment, knowledgeable and informed, and above all else, kind.
Lois Payne
Comment | Share Posted Feb 02, 2020 at 07:42pm via Condolence
SF

I love you, Cynthy, and shall miss you. You were always so thoughtful toward me and your nieces. I so admired your political and environmental work....even planning a green burial for yourself to respect Nature.
Love from your sister Sandy
Comment | Share Posted Jan 29, 2020 at 08:06pm via Condolence