To share your memory on the wall of Deo Ramlal, sign in using one of the following options:

Print
“This life is the crossing of sea, where we meet in the same narrow ship.
In death we reach the shore and go to our different worlds”
Rabindranath Tagore
Stray Birds

Deo Ramlal
June 24, 1925 – July 10, 2019<... Read More
“This life is the crossing of sea, where we meet in the same narrow ship.
In death we reach the shore and go to our different worlds”
Rabindranath Tagore
Stray Birds


Our dear Papa was the eldest of 8 children and is survived by one sister in Trinidad where he was born and spent most of his life until 1994 when he emigrated to Canada.

He was blessed with a most wonderful wife in Phulbass Ramlal (Ablack) (deceased in 1981) and his final words on this earth was calling her name. He had 8 children – Gunness Ablack (deceased), Joe Ablack (deceased), Dino Ramlal , Dave Ramlal, Helen Baldeo-Gutierrez (Ramlal), Kris Ramlal, Lakhan Ramlal (deceased) and Gloria Shoon (Ramlal).

In his later years his sunfilled smile was not only for his children and grandchildren but especially for his great grandchildren. Sixteen to be more exact and he absolutely loved spending time with them creating memories that we will cherish forever. Jade, Adam, Jasmin, Janel, Annysa-Lynn, Devon, Eve, Ana, Josh, Cailin, Dane, Logan, Lennox, Leo, Lauren and the newest addition, Daxton.

What a legacy he leaves including a great great granddaughter – Ziah.

He was a man of dedication to whatever he was doing – whether that was work or play. His favourite things were gardening, golfing and horseracing.

In his early 20’s while working at the Point-A-Pierre Golf Club in Trinidad as a grounds keeper, his love affair for golf was sown. Years later while on the grounds, he was struck by lightning and survived to tell the story of this terrifying event.

It was in 1953 when the manager of Texaco Oil Refinery, Pointe A Pierre, Trinidad, took him under his wing. He became a pipe fitter at the age of 28 until his retirement. His love for golf was so deeply etched in his heart that he also worked part time as a caddie master at the Pointe-A-Pierre Golf Club. Five years before he retired from Texaco in 1990, he won the Trinidad Open Golf Tournament for his age group. And a few years after his retirement, at the age of 67, he accepted a position as a supervisor at the Point-A-Pierre Golf Club and stayed until 2002.

In 2007 at the age of 82, he had a stroke at the Piarco International Airport in Trinidad while waiting to board to travel to Canada. With the loving support of his daughter Gloria and grandson Arnold, who flew to Trinidad to get him back to Canada and their care for him he recovered to full health after spending 46 days in Markham Stouffville Hospital. Since then, he has been living in Ontario with his daughter Gloria and her family.

Three of the most favourite things that he loved to do was growing fruits, flowers and vegetables, horse racing and golf. He absolutely loved Tiger Woods and would watch him play every time he had a chance. Just this year when Tiger Woods won the Masters, he called everyone to share the news.

We’re all going to miss you. Your laughter, your smiles, and your hugs will stay with us forever. So through our tears, let us see the blessings of knowing and loving you.

And through our grief, let us also smile and be happy that he is hugging his family and holding his loving wife’s hand again.

From the unreal to the real, from darkness to the light, from the earth to the open skies, you left this dimension for eternal light. . .

Special thanks to Dr. Dore and staff at Guelph General Hospital and Hospice Wellington for their kindness over the past two weeks, as well as the staff at Stone Lodge for their care and compassion for the past five years.

A service will be held at Gilbert MacIntyre and Son Funeral Home, Hart Chapel, 1099 Gordon St, Guelph, on Saturday, July 13, 2019 at 4 p.m.
In lieu of flowers, donations may be made to Hospice Wellington. Donation cards are available at the funeral home or online at www.gilbertmacintyreandson.com.

Receive notifications about information and event scheduling for Deo

We encourage you to share your most beloved memories of Deo here, so that the family and other loved ones can always see it. You can upload cherished photographs, or share your favorite stories, and can even comment on those shared by others.

Guaranteed hand delivery by a local florist
A

Posted Jul 19, 2019 at 09:03am
Eulogy for my dear Papa – July 13, 2019
Papa I bless you on your journey to meet Lord Krishna and Mother Lakshmi. I want you to know how your presence in my life has blessed me.
You have shown me what it means to have strength and courage just by the way you have handled so many changes in your life – from loosing your last born son, Lakhan in 1972; the love of your life, Phulbass in 1981 and your first born grandson, Steven in 1992.
You used your losses to seek opportunities in other areas – like golf, gardening and the love of family even more!!!
Your stroke in 2007 was a marker year of your disciplined strength, courage and will to live; having spent 46 days in Markham Stouffville Hospital with a full recovery.
You gracefully accepted the opportunity that you now needed to live with your family in Canada. To have you live with me for 7 of the last 12 years was truly a gift!!!
The love of family was soo important to you...the same way you cared for your Dad I have tried to care for you. I remember how every Sunday, my Aja would walk up the street to our home....you would shave him, cut his hair and he would have Sunday lunch with us! Over the last 2 years it was my turn to do the same for you – shave your head and face!!!
You have truly given me an understanding of where I come from and who I am. And most of all, you have shown me what it means to be loved and to love in return. Always with a smile – that’s my Papa – I don’t think I have any photos of you where you didn’t have the most sunfilled smile!!!
THESE ARE MY BLESSINGS FROM YOU!!!
Here is my wish for you on this next leg of your journey:
Go dance in the sky with all your loved ones
Enjoy golf everyday
I know your vegetable and flower garden would be fruitful and beautiful
And bet on the horseracing sometimes....
THANK YOU MY DEAR PAPA!!!

Posted Jul 15, 2019 at 04:42pm
I remember that daily smile, fixed in peace, waiting for the time to meet his dear wife, undoubtedly willing yet leaving a touching legacy of love among his family. It was an honour and a privilege to be at his side in the last days.
Comment Share
Share via:

Dr Dore - our sincerest thanks and appreciation to you and all your staff who took care of my Dad while he was at Guelph General Hospital - your loving compassionate care is most appreciated!!!
TH

Posted Jul 14, 2019 at 06:52pm
Gloria & Paul and family: Your Dad was such an avid gardener, so we thought planting a memorial tree in his honour might be nice...

I remember how you always asked how the kids were doing in school, because it was important to you that they did well and succeeded in life.

I remember playing golf with you; so much fun and I never got to beat you. Your words "OK Eds, I think you lost that ball; drop another one and let's keep playing.."

I remember having a drink of scotch with you. You would say "Eds, you having one?"

I remember how everything you planted, flourished and bore many fruits. I remember watching you stoop to plant the coconut trees; how you knew every coconut on those trees. As recently as last month we planted tomato trees at Stone Lodge.

I remember lighting diyas with you at Diwali and your great devotion to Mother Lakshmi and Lord Ganesh. He has certainly removed your obstacles and She has blessed you with good fortune and light.

Dads, now that you have crossed over and are no longer with us, we remember you; and through those fond memories you will always be with us to guide us and teach us.

Travel well my dear Friend and Dad in Love and Light, it was a privilege to have walked a little with you in this life. Stop by for a chat sometimes.
Much love 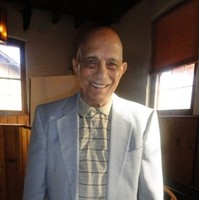 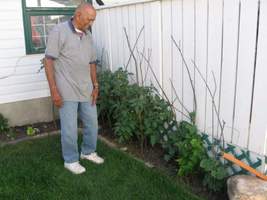 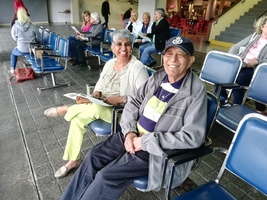 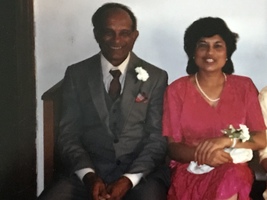