To share your memory on the wall of Mr. Edward Neve, sign in using one of the following options:

Provide comfort for the family of Mr. Edward Neve with a meaningful gesture of sympathy.

It is with great sadness that the family announces the death of Edward “Ted” Albert Neve on October 4, 2019 in Guelph, with his daughters and granddaughters by his side. Ted was born on May 28, 1922 in Shawinigan, Quebec into a family of 4 brothers and 6 sisters and nicknamed Sonny, a name he would be called by his siblings his whole life. Ted left Shawinigan in 1940 to join the Royal Canadian Air Force in World War II where he trained and served as a pilot with the Number 6 Bomber Command in England and later in the bomb
detonation squad in England and Germany. During the war, he fell in love with Margaret Read Emmerson, a fellow Canadian from New Brunswick, who served in the RCAF as a Lead Airwoman. They married on June 28, 1945 in Yorkshire, England. They spent the next 60 years together, Ted and Chick, as he lovingly always called Margaret, raising their family in Quebec and later in Ontario. They lived out their love story right to the end, when Ted cared for his Chick for the last 5 years of her life with unwavering commitment and deep love.

Ted was loved by his children; Margaret Ann and Eric Brennand of Georgetown, Peter and Margie Neve of Westport, Sharon Neve-Gray and Terry Gray of Guelph, Paul and Diane Neve of London and was predeceased by his daughter Karen (2001) and Bev Dodge of Dundalk. He was beloved as Grampy by his grandchildren; Dan & Angie, Cindy, Tonya, Jennifer & Mark, Melissa & Tim, Kelly & Simon, Mike & Tara, Trevor & Laura, Kevin, Meghan, Amanda, Katie and Chrissy and 23 great-grandchildren. He is survived by his brother Bob a.k.a Spook, sisters Connie (Bruce) and Myrtle a.k.a Tubby (Larry) and brother-in-law John and his wife Crystal Emmerson and many nieces and nephews. In his last years, Ted met Margaret Hume with whom he shared 11 wonderful years with her and her family. A very special thank you to Anne and Nurse Next Door who cared for Ted with compassion and kindness and the nurses at St Joseph’s Health Care Centre in the palliative wing especially Jennifer, Hannah and Erin. Rest in peace Dad, we know you have found Mum and Karen.

Friends are invited to the Gilbert MacIntyre and Son Funeral Home, Dublin Chapel, 252 Dublin Street North, Guelph on Tuesday, October 8, 2019 from 1-2 p.m. A service will be held in the funeral home chapel at 2p.m. Online condolences can be made at www.gilbertmacintyreandson.com.
Read Less

We encourage you to share your most beloved memories of Mr. Edward Neve here, so that the family and other loved ones can always see it. You can upload cherished photographs, or share your favorite stories, and can even comment on those shared by others.

Posted Oct 07, 2019 at 10:25am
Dearest Neve Family,
My sincere heart felt condolences to you all- God bless.
Grampy Ted will be missed greatly. He was a wonderful man, whom we had the honour of spending much time with and creating a whole heap of cherished memories. Thank you Grampy Ted. Forever in our hearts- Nicole, Miguel, Zeniyah & Zekhai. Xo
Comment Share
Share via:
HS

Flowers were purchased for the family of Mr. Edward Neve. Send Flowers 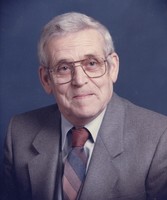