To share your memory on the wall of Eileen Hammill, sign in using one of the following options:

Eileen Hammill (née Mack), passed away at the Guelph General Hospital with her daughter at her side on 28 March 2020. She was the beloved wife of Ken O Hammill, recently decease... Read More
Eileen Anne Hammill (Mack) (16 March 1930-28 March 2020)

Eileen Hammill (née Mack), passed away at the Guelph General Hospital with her daughter at her side on 28 March 2020. She was the beloved wife of Ken O Hammill, recently deceased (February 5, 2020) after 67 years of marriage and older sister to the late Robert Mack (July 5, 2014). Eileen will be greatly missed by her children Mike (Odette), John, and Cassie (Murray), her 6 grandchildren Catie, JP, Connor, Sarah, James, Alex and great grand-daughter Elspeth.
Born in Guelph Ontario, on 16 March 1930, to Ellen M. Bulger and Horace G. Mack, Eileen grew up in Guelph where she attended GCVI high school before moving on to McMaster University, graduating with a BA. While at University, Eileen met her future husband Ken, and they were married in 1953. After a brief stay in Oakville, the young family returned to Guelph where they raised their family. Known for her strong mind, Eileen was always ready to discuss and debate subjects related to European (Irish) history, family and politics, all of which she adored. Always present to run her children to the rink, whether for hockey or figure skating or to the pool or soccer pitch, she ran a very tight ship. As her family grew up, Eileen and Ken took much pride in supporting their grandchildren.

Like her husband, Eileen felt very strongly about their community and much of their efforts went to ensuring Guelph was a better place to live, including helping to found the Guelph Community Foundation. Ken made his own mark, but they made a formidable team, bolstered by Eileen’s network, strategic thinking and sober second thought. Active in politics she worked in many campaigns of the old Progressive Conservative Party federally and provincially. During the 1960s she served as president of the Guelph Historical Society promoting the establishment of the Guelph Museum and the preservation of Guelph’s Heritage buildings. In the 1980’s, Eileen was instrumental in the establishment of the Southern Ontario Library Service, served on a provincial government task force on public library funding and was recognized by the Ontario Public Library Association as Trustee of the Year in 1990. In her nearly 30 years as a member of the Guelph Public Library Board, the library grew from a circulation of less than 400,000 to 1.8 million, and from one location to six.

Resting at the Gilbert MacIntyre & Son Funeral Home, Hart Chapel, 1099 Gordon St., Guelph. Owing to the pandemic, Eileen will be interred in a private service at Woodlawn Cemetery on 31 March 2020. Details for a public service will be announced at a later date. As expressions of sympathy, donations to the Guelph Public Library Fund under the umbrella of the Guelph Community Foundation would be appreciated by the family https://www.guelphcf.ca/ForbrDonors/WaystoGive.aspx#donatenow . Cards available at the funeral home (519-821-5077) or condolences may be sent to www.gilbertmacintyreandson.com
Read Less

Receive notifications about information and event scheduling for Eileen

Donations are being accepted for: THE GUELPH COMMUNITY FOUNDATION.

We encourage you to share your most beloved memories of Eileen here, so that the family and other loved ones can always see it. You can upload cherished photographs, or share your favorite stories, and can even comment on those shared by others.

Posted Apr 15, 2020 at 06:08am
Cassie, I am so very sorry to hear of the loss of your mom. My heart goes out to you and your family during this difficult time. May her beautiful legacy continue to live on in you all. Blessings, Barb Watson XX
Comment Share
Share via:
JH

Posted Apr 02, 2020 at 10:05am
Dear Cassie and family,
I was so sorry to learn about the passing of your mother. Her obituary revealed that she was a remarkable woman, mother, and grandmother. I am sorry for your family's loss.
Sincerely,
Jane Hardisty
Comment Share
Share via:
BS

Posted Apr 01, 2020 at 09:15pm
Cassie, Murray and family
Our sincere condolences to your family at this difficult time. Our thoughts and prayers are with you.
Hugs
Mel and Brenda Sim
Comment Share
Share via:
KQ

Posted Mar 29, 2020 at 07:44pm
A dear friend for so many years. We did not see much of each other these last few years but when we met it always was with a hug. I will miss your insights on so many subjects.we shared so many good times during elections and municipal events. Rest In Peace my friend. You are together again with Ken.
Comment Share
Share via:
DG

Posted Mar 29, 2020 at 12:10pm
Dear John & Family;
A note to extend my sincere sympathy on the lass of your Mom. Losing your parents is a significant time in your lives, so my prayer is that you will be granted peace and grace through this time. 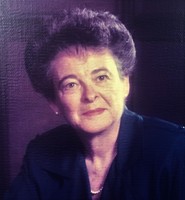