To share your memory on the wall of Mr. Enrico Ventresca, sign in using one of the following options:

Provide comfort for the family by sending flowers or planting a tree in memory of Mr. Enrico Ventresca

Provide comfort for the family of Mr. Enrico Ventresca with a meaningful gesture of sympathy.

Passed away at his residence on Saturday, August 24, 2019, 4 days short of his 88th birthday. Predeceased by his wife of 58 years, Santa (Molinaro) who passed away in 2013. Enrico is survived by his son Donato and his w... Read More
Ventresca, Enrico

His family will receive friends at the Gilbert MacIntyre and Son Funeral Home, Hart Chapel, 1099 Gordon St., on Wednesday, August 28th, fom 6-9 pm. A funeral service will be celebrated at the funeral home on Thursday, August 29th at 11:00 am with entombment at Marymount Cemetery. If so desired, donations to the Kidney Foundation of Canada or the Elliot Retirement Community would be appreciated. Cards are available at the funeral home 519-821-5077 or send condolences to www.gilbertmacintyreandson.com.
Read Less

We encourage you to share your most beloved memories of Mr. Enrico Ventresca here, so that the family and other loved ones can always see it. You can upload cherished photographs, or share your favorite stories, and can even comment on those shared by others.

Silvano and I would like to send our condolences to you and your families.

We will keep your uncle in our prayers

Posted Aug 29, 2019 at 12:20pm
Hi Danny and Family. We are sad to hear of Compare Rico's passing. I remember how happy and excited he always was to see us whenever our family visited. He always made us feel welcome! We hope you find strength in family and friends to get through this difficult time and we hope you hold on to many happy memories of your dad.
Sincerely,
Gloria (Ventresca) Lasovich and Family
Comment Share
Share via:
NK

Posted Aug 28, 2019 at 10:31pm
Hello Danny and Family,
I am so very saddenned to hear of your Dads, compare Rico's passing.
He will be remembered for his hearty laugh and jovial disposition in my many memories of our get togethers.
Please know that you are all in my thoughts and prayers this week.
With sympathy,
Nina (Ventresca) and Bill Koniuch, Barrie, Ontario

Posted Aug 28, 2019 at 10:14pm
Danny, our sincere condolences to you and your family during this time. I have fond memories of Compare with his big hugs and his infectious smile. He will be missed by many I'm sure.
Sending hugs your way.

Posted Aug 28, 2019 at 09:52pm
Dear Donato and family we are not in town but our condolences on the passing of your father. John & Joanne Zardo
Comment Share
Share via: 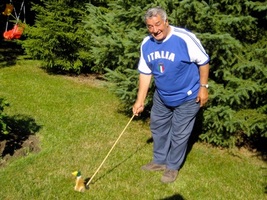