To share your memory on the wall of Mr. George Gemin, sign in using one of the following options:

Provide comfort for the family by sending flowers or planting a tree in memory of Mr. George Gemin

Provide comfort for the family by sending flowers or planting a tree in memory of Mr. George Gemin

With heavy hearts and profound sadness, we announce the sudden passing of George Gemin at the age of 74. He was the dear father of Lisa Cleghorn (Rob) and Denise Gemin (Tom). He is lovingly remembered by three grand-childr... Read More
GEMIN, George

With heavy hearts and profound sadness, we announce the sudden passing of George Gemin at the age of 74. He was the dear father of Lisa Cleghorn (Rob) and Denise Gemin (Tom). He is lovingly remembered by three grand-children Garret, Alyssa, and Brayden. He is survived by his Mother, Lina Gemin and his siblings Gerry (Kathy), John (Jo-Anne), Gabriella, Julie, Gilberto (Fiona), Gloria (Jeff). He is pre-deceased by his Father, Sergio Gemin. He will be missed by many nieces and nephews in Canada; as well as aunts, uncles and cousins in Canada, Italy and Australia. George was born in Caerano San Marco, Italy and arrived in Guelph with his parents and siblings in December of 1959. George was a hard worker who trained as a Tool & Die Maker in the mid-1960’s and continued to work at his trade until his death. George will be remembered for his generous, unfailing love to his daughters and as a special Nono to his grand-children.

Private cremation has taken place. As expressions of sympathy, donations to Diabetes Canada would be appreciated by the family. Donation cards are available at the Gilbert MacIntyre & Son Funeral Home, Dublin Chapel, 252 Dublin St. N., Guelph 519-822-4731 or online at www.gilbertmacintyreandson.com
Read Less

We encourage you to share your most beloved memories of Mr. George Gemin here, so that the family and other loved ones can always see it. You can upload cherished photographs, or share your favorite stories, and can even comment on those shared by others.

Posted Jul 10, 2020 at 06:05pm
I'm so sorry to hear about George. He was married to my aunt Judy so I had the pleasure of getting to know him. I always thought he was a lovely person and a pleasure to be around. I'll always remember his easy going nature and his smile. My heart breaks for all of you. Deepest condolences to you all.
Tammy Stys and family
Comment Share
Share via:
C

I am so sorry for your loss and in such a tragic manner. I remember George well as an avid Thunder Hockey fan. Please know I am thinking of you all.

Thank you Carol ♥️ He was a great man and we loved him dearly!

Posted Jul 06, 2020 at 11:16am
Sincere Condolences to George's Family. George was a great man and sharp as a whip. I enjoyed working with him over the past few years and I will truly miss coming in to work and seeing his smiling face! He would make sure to keep me on my feet, and always make sure i had the next job lined up for him, which actually meant that i had to stay organized. I always enjoyed seeing him on Saturday mornings at work and sharing coffee break with him. To me it meant that our team was busy and George wanted to stay ahead of everyone to make sure they had work to do. He will always be missed here by the ETSM family and by myself especially. Thank you George for the memories!
Comment Share
Share via:
LC

Thank you so much ❤️Our Dad loved to go to work, it was his refuge ! Thanks for being such a good friend to him !
DB

Posted Jul 04, 2020 at 08:09pm
Denise and family I am sending my heartfull sympathy on the passing of your Dad. Thinking of you all at this difficult time.
Comment Share
Share via:
DG

Thank you Darlene for thinking of us at a time like this . ❤️
JK

Posted Jul 04, 2020 at 03:13pm
Gerry, Kathy and Gemin family our sincere condolences on the loss of George. We are thinking of you at this difficult time. 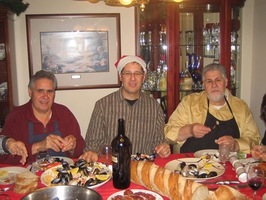 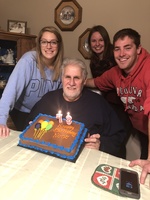 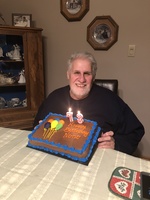