To share your memory on the wall of Mr. John Caron, sign in using one of the following options:

Provide comfort for the family by sending flowers or planting a tree in memory of Mr. John Caron

Provide comfort for the family by sending flowers or planting a tree in memory of Mr. John Caron

Although everyone knew him as “John”, he was incredibly proud of his French Canadian heritage dating back to one of “les premiers habitants” of New France, Robert Caron (1634). He was born Jean Michel Caron in 1935, to Edgar Caron and Kathleen Christopher in Montreal, Quebec. He is predeceased by his younger sister Janice Watt and by his adopted brother Roger Caron of St. Louis, MO.

In 1955, while attending Mount Allison University for engineering (and playing on Mount A’s first football team), he joined the Royal Canadian Air Force (RCAF), thus commencing a 40-year career in aviation. He trained as a Long Range Aerial Navigator and received a Queen’s Commission in 1957. He was stationed in Torbay, NL, as part of the RCAF Maritime Air Command, where he flew search and rescue missions during the Cold War as part of the Lancaster Bomber No. 107 Rescue unit crew. He later transferred to become an instructor at the RCAF Air Navigation School in Winnipeg. There he met a young RN named Darlene from Drumheller, Alberta and they married in 1962. He retired from the RCAF with the rank of Flight Lieutenant and joined Air Canada in 1966 as a Navigator, later training to become a pilot when technology made human navigation officers obsolete.

John was active in community service throughout his life. He was a founder of the Bramalea Ratepayers’ Association and the Federation of Urban Neighbourhoods (Ontario), and served on the Puslinch Planning Board for many years. He was active in Kiwanis (a Mel Osborne and Hixson Fellow and District Secretary-Treasurer for Eastern Canada and the Caribbean) as well as the Rotary Club of Guelph (a Paul Harris Fellow) and the Guelph & Wellington Men’s Club. John was a life member of the Canadian Warplane Heritage Museum, where his beloved Lancaster Bomber from Torbay was restored, and is now known as the Mynarski Memorial Lancaster.

John is resting at MacIntyre & Son Funeral Home and Chapel at 252 Dublin Street North in Guelph. A private family interment will take place on Monday, November 2, 2020 at Woodlawn Memorial Park. An online Celebration of Life service will be held at a later date due to COVID-19. To register to be informed about the online service, or to send your memories about John’s life, send an email to johnslastflight@gmail.com.

In lieu of flowers, donations to the Guelph Civic Museum or Canadian Warplane Heritage Museum would be greatly appreciated.
Read Less

Donations are being accepted for: CANADIAN WARPLANE HERITAGE.

We encourage you to share your most beloved memories of Mr. John Caron here, so that the family and other loved ones can always see it. You can upload cherished photographs, or share your favorite stories, and can even comment on those shared by others. 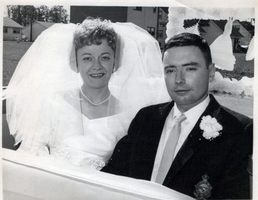