To share your memory on the wall of John Atkinson, sign in using one of the following options:

Provide comfort for the family of John Atkinson with a meaningful gesture of sympathy.

On March 13, 2019, John was welcomed by his Lord and Saviour. He passed away at Hospice Wellington surrounded by his family at the age of 92. Predeceased by his beloved wife Ann Atkinson (nee Ferguson) (2009). Loving father of John Atkinson (late Karen), Diane Creamer (Bill), Elizabeth Pol (Jack), and Marian Lawr (Brian Lefneski). Cherished grandfather of Steven (Laurie), Heather (Tom), Eric (Helene), Jessica (Dustin), Michael, Andrew, and Christina, and great grandfather of Ryan (Jessica), Aaron, Hanna, Steven, Brandon, and Beck, and great great grandfather of Emberley. Predeceased by his two brothers. He will be deeply missed by many nieces, nephews, and extended family in Cape Breton, and especially missed by his niece Shirley.

John was very social and he enjoyed participating in the Out and About Program. John enjoyed attending Grace Community Church, and all the friends he made there. He made friends everywhere he went.

Friends will be received at Gilbert MacIntyre and Son Funeral Home, Hart Chapel, 1099 Gordon St, Guelph, on Friday, March 29, 2019 from 2-4 and 7-9pm. A memorial service for John will be held in the funeral home on Saturday, March 30, 2019 at 11:00 a.m. As expressions of sympathy, donations to Hospice Wellington would be appreciated by the family. Donation cards are available at the funeral home (519-821-5077), or online condolences may be left at www.gilbertmacintyreandson.com.
Read Less

Posted Mar 28, 2019 at 04:30pm
I work as a Volunteer at the Pacemaker Clinic held at the Guelph YMCA for St. Mary's Hospital in Kitchener. Immediately I was inspired by John's wonderful smile and warm welcome. We met several times at the Clinic and I truly loved his gentle, quiet humour and sincere manner and so looked forward to his visits. I will miss him - he was a treasure.
Cathie von Dehn, Volunteer for St. Mary's Hospital.
Comment Share
Share via: 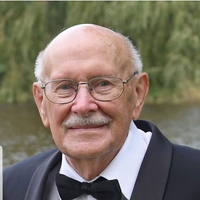