To share your memory on the wall of John Regts, sign in using one of the following options:

Passed away at his home in Guelph on Tuesday, May 19, 2020. John Regts, in his 67 year, was just short of his 47th wedding anniversary with his beloved wife Kathy (Cutforth) Regts and was the loving father of Joel and Jess... Read More
Regts, John—

Passed away at his home in Guelph on Tuesday, May 19, 2020. John Regts, in his 67 year, was just short of his 47th wedding anniversary with his beloved wife Kathy (Cutforth) Regts and was the loving father of Joel and Jesse and his wife Michelle. He was the proud grandfather of Arabella Laurel Jean and Dylan Thomas John. He was the dear brother of Hank (Sarah), Ed (Terry), Gord (Marg), George (Rosie), Ben (Barb), Edie (late John), Greg and family. John is survived by his sister-in-law Diane and also by many nieces and nephews. Predeceased by his siblings, Hans, Gerald (late Gertie), and Cathy.

John and his family have been proud owners of IF.. Footwear Boutique for 27 years. John was a beloved downtown figure having made many friends. He will be missed by everyone. John was larger than life, filled with lots of love and laughter. Forever the jokester, he always had a kind word for everyone and a twinkle in his eye. He will live on in our hearts.

Private cremation has taken place. John was a big animal lover and as expressions of sympathy, donations to an animal rescue organization of your choice would be appreciated by the family. Donation cards are available at the Gilbert MacIntyre & Son Funeral Home, Dublin Chapel, 252 Dublin St. N., Guelph (519-822-4731) or online at www.gilbertmacintyreandson.com
Read Less

I will never forget him during one of the Toronto Shoe Shows, filling bottles of water from the bathroom and carrying it to my showroom for the flowers during because I was on my own and couldn't leave the room.

Always joy to see and will be missed. My deepest condolences to Kathy, Joel & family. 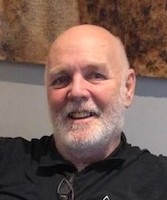