To share your memory on the wall of John Sabljic, sign in using one of the following options:

Surrounded by the people that loved him most, John Anthony Sabljic passed away on Thursday, May 2.

Surrounded by the people that loved him most, John Anthony Sabljic passed away on Thursday, May 2.

He also lives on in the hearts, minds and fond memories of his parents, Ivan and Doris Sabljic, his siblings Josephine (Tony Labriola), Matthew, Mary (John Bruno), Caroline (Robert Lumley), Patricia (Jim Loveys) and Dolly, mother and father-in-law Giuseppe and Giuseppina D’Angelo, and brother and sister-in-law Rina and Domenico Ranalli.

John’s life will be cherished by his many nieces, nephews, cousins and close friends.
Though he liked to describe himself as “a simple guy,” John was anything but. He possessed an outlandish sense of humour and a vibrant, creative mind that allowed him to transform even the most ordinary situations into something magical, weird and hilarious.

He was intensely curious about the world around him and had an encyclopedic knowledge of anything from music and pop culture, to world history, sports and UFO conspiracies. This made him both an amazing conversationalist and formidable Trivial Pursuit opponent.
John had the generosity and patience of a saint and lived for his family. He doted on his wife, was fiercely proud of his son, cared passionately about those he loved and always, always put himself last.

A very special thank you to the nurses and doctors at St. Mary’s General Hospital for their kindness and compassion in John’s final hours.

John is resting at the Gilbert MacIntyre and Son Funeral Home, Hart Chapel, 1099 Gordon St., Guelph. His family will receive friends on Tuesday, May 7 for a visitation from 12:00 to 3:00 p.m., followed by a Celebration of Life in the chapel at 3:00 p.m. Tea, coffee and pie – John’s favourite – will be served after the service.

In lieu of flowers, please consider donating to the Heart and Stroke Foundation. Cards are available at the funeral home, or donations and condolences may be made on line at www.gilbertmacintyreandson.com
Read Less

Erna Lokody and family, Ed and Pat Lumley and famly, and other have sent flowers to the family of John Anthony Sabljic.
Show you care by sending flowers

Posted May 08, 2019 at 10:21am
Our deepest condolences, to all of you, at this most difficult time. I remember John fondly. Sending prayers for strength and peace to find you as you cherish the great memories you will always have. Our thoughts are with you. xo

Posted May 07, 2019 at 12:04pm
Mary and Joey, our deepest condolences on the sudden loss of your beloved husband and father. Our thoughts and prayers are with you and your family.

Posted May 07, 2019 at 11:06am
My prayers and thoughts are with you and your family during this difficult time.
With my deepest sympathy, Antonella Salituro
Comment Share
Share via:
AS

Posted May 07, 2019 at 11:06am
My prayers and thoughts are with you and your family during this difficult time.
With my deepest sympathy, Antonella Salituro

Flowers were purchased for the family of John Sabljic. Send Flowers 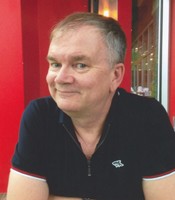