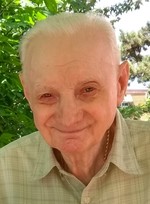 John and Irene immigrated to Canada in 1957 and worked on a farm in Leamington, Ontario. John studied at the University of Waterloo to get Canadian accreditation in electrical engineering, then moved to Guelph in 1959 to begin a productive career designing transformers for General Electric and later for Hammond Manufacturing. John was an active member of the Canadian Hungarian Club, including holding leadership positions in the club. John was a member of Holy Rosary Parish for 61 years. John positively touched the lives of his extended family and friends, was loved by all, and will be dearly missed.

John led an active healthy life until very recently. The family thanks all of John’s caregivers at Guelph General Hospital and Father Vernon Boyd for their compassionate service.

Visitation will take place virtually on Saturday, January 30, 2021 at 1pm using the Zoom platform by following this link https://zoom.us/j/98915390044. The family will distribute the password for the Zoom meeting directly to friends and family and will have them distribute it to their relevant contacts. If you do not receive the password by Saturday morning, please send an email request to info@gilbertmacintyreandson.com. A funeral mass will be held at a later date.

As expression of sympathy, donations to the Guelph General Hospital Foundation or Holy Rosary Parish would be appreciated by the family. Online donations and condolences can be made at www.gilbertmacintyreandson.com.