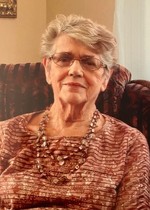 Smith, June Marie (O'Neill) peacefully at the Elliott Nursing Home, Guelph, Ontario November 26, 2019 in her 91st year born in Toronto 1929. Wife of late Rupert Smith who died November 26, 1994. Mother of Ann and Sam Beckett and their sons Brendan, Corey and Jessica; Sharon and Les Sulpher and their children Stewart, Adam and Lisa, Melissa and Brian, Jennifer and Mike, Aimee and Jeff; Loretta and Robert Bray and their children Chris and Katie and Melanie and Brian; Maureen and Robert Munden and their children Joram, Jackson and Joey; Pauline and Craig Weir and their children Erin and Brandon, Ryan and Mary, Brook; Michelle Bellows and her children Tyrell and Jaime, Ben and Naomi, Josh; and Theresa and Sean Foster and the late Timothy Smith (July 26, 1993). June is survived by 18 grandchildren and 25 great-grandchildren.
Sister to Joyce Hendriks, Geraldine Scott, sister-in-law Doreen O'Neill (Earl, deceased), Paul O'Neill (deceased), Pat O'Neill (deceased) and Lois Rutledge (deceased).

June met her future husband Rupert at a youth group at St. Anthony’s Young People in Toronto and they married in 1951. The Smiths settled in Guelph in 1960 and June worked with her husband to found a small business, RANGER METAL PRODUCTS, which they grew into an international company. June was a tireless volunteer in both her community and her Church. June and Rupert were founding members of St. John’s Parish in Guelph and were actively involved in other Guelph parishes. June gave of herself to support pro-life work in the area and helped to coordinate the Guelph efforts to resettle more than 200 refugee families. As a lifelong member of the CWL June continued to support the work of that organization.
June’s faith was the cornerstone of her life and she gave generously to numerous Catholic Charities, particularly the Oratory of St. Philip in Toronto, the Mission Helpers of St. Lucia and Our Lady Seat of Wisdom College in Barry’s Bay, Ontario.
She was a benefactor to Michael House in Guelph and to many other charitable Groups and people too numerous to mention. Above all, June loved her family and was very proud of their many accomplishments.
She lived a full life blessed with many friends and in Scriptural terms ‘lived to see her children’s children’ grow and thrive.

Visitation will be at Gilbert MacIntyre and Son Funeral Home, Hart Chapel, 1099 Gordon Street, Guelph on Friday, November 29, 2019 from 3-5 and 7-9 p.m. A Funeral Mass will take place at Holy Rosary Church, 175 Emma Street, Guelph on Saturday, November 30, 2019 at 10:30 a.m. Interment following the Mass at Marymount Cemetery.

Memorial donations made to the Rupert & Timothy Smith Charitable Foundation, The Elliott Community or Michael House would be appreciated by the family. Donation cards are available at the funeral home (519-821-5077) or donations and condolences may be made at www.gilbertmacintyreandson.com