To share your memory on the wall of Mr. Lin Whitman, sign in using one of the following options:

Provide comfort for the family by sending flowers or planting a tree in memory of Mr. Lin Whitman

Provide comfort for the family by sending flowers or planting a tree in memory of Mr. Lin Whitman

Lin passed away peacefully with his family by his side on Sunday May 12, 2019, in his 91st year. A small town boy from Emerson, Manitoba, he never left his small town behind.
He attended the University of Manit... Read More
Linley Vail Whitman

Lin passed away peacefully with his family by his side on Sunday May 12, 2019, in his 91st year. A small town boy from Emerson, Manitoba, he never left his small town behind.
He attended the University of Manitoba graduating with a Bachelor of Commerce degree in 1950. During this time he enjoyed his first adventure hitch hiking to B.C.
A passion was sparked in Lin in 1952 while walking through a fleet of Mustang aircraft in the air force hangar. There he discovered the exciting prospect of joining the 402 Reserve Squadron. Even in his later years, he loved to remember flying through the clouds.
During the summer of 1952, Lin met Cathie, love of his life, when she walked into the Bank of Commerce in Winnipeg where he was working. Upon seeing this vision of beauty he declared, “That’s the woman I’m going to marry!” They were engaged three months later on New Year’s Eve and married the following August.
Lin joined the Canadian Indemnity Company in the spring of 1955 in Winnipeg. In mid 1958 he was transferred to the Toronto branch, where he rose through various positions, eventually becoming President.
Lin and Cathie found their dream home in Scarborough on a ravine lot at EIGHTY-NINE Botany Hill Road. Always an enthusiast of art and music, he developed a passion for sculpting and learned from his mentor Elizabeth Fraser Williamson. In 1985, Lin and Cathie opened the Whitman Gallery in downtown Toronto.
Lin wrapped up his career, as president of the Lawyers Professional Indemnity Company in 1994. After retiring, he continued his involvement in the art scene through the Scarborough Arts Council, the Guild Renaissance Group and redevelopment of the Guild Inn.
Lin is loved by his wife Cathie (deceased), his children, Catherine (Bill), John and Karen (Kevin), his grandchildren, Andrew, Tara (Sean), Paul, Greg (Tanya), Heather, Mike (Brittany) and Scott, and his great grandchildren, Quin, Hallie, Jack and Maddie as well as a bunch of dogs and cats.
His granddaughter said it best, “He’s our lovable pain”. He’s now on the road to the rest of his life as he bids us adieu with, “And you know what? I really love you!”
There will be a celebration of Lin’s life in the retirement living library at the Village of Riverside Glen at 60 Woodlawn Rd. E. in Guelph on Saturday June 8 at 3:00 PM. Lin would appreciate a donation to either The Scarborough Arts Council or The Alzheimer’s Society.
Read Less

We encourage you to share your most beloved memories of Mr. Lin Whitman here, so that the family and other loved ones can always see it. You can upload cherished photographs, or share your favorite stories, and can even comment on those shared by others.

Plant a Tree in Memory of Mr. Lin Whitman
Plant a tree 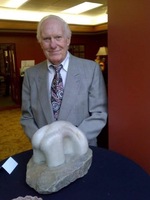