To share your memory on the wall of Mary Hill, sign in using one of the following options:

Provide comfort for the family of Mary Hill with a meaningful gesture of sympathy.

It is with deep sadness that we announce the passing of Mary Hill (nee Matthew) of Guelph on February 3, 2020 at the age of 87. She is predeceased by her parents Harry and May Matthew, husband Arthur Elgin Hill, her sister Hilda and brothers Edmund and John. Dear sister of Alice (James) Pelletier and Phyllis (Bob) Castle, and sisters in law Marlene and Margaret Matthew. Loving mother of daughters Sharon (Mark), Susan (Derek), Colleen, sons Doug (Kim) and Hugh, grandchildren Brendan, Natalee, Jordan, Lindsay, Meghan, Delaney and great grandchildren Owen and Miller.

Mary was born in the Blenheim, Ontario area on October 18, 1932. She attended the McKeough Public School and Chatham Vocational School for her high school years before pursuing a nursing career which began at St. Joseph’s Hospital in Chatham. Mary’s career took her to various hospitals including Mt. Sinai in Toronto and Dufferin Area Hospital in Orangeville. Mary’s nursing experience included working in all departments, but her favourite was working in the obstetrics ward where she thoroughly enjoyed working with newborns. Upon retirement she and Art moved to Blenheim to be closer to family. After Art’s death she moved to Guelph, once again to be closer to family.

While raising a family Mary enjoyed camping trips to Rondeau Provincial Park and often talked about the good times with her siblings and their families. She hosted many gatherings of family, friends and her children’s friends. She welcomed everyone into her home and could be found in the kitchen cooking meals for a large crowd. She loved to dance and was never one to shy away from a good polka. During her children’s teen years, she often attended their parties at the Pines and was often found on the dance floor.

Mary was an avid hockey fan and her favourite team was the Maple Leafs. She would often talk about the players that she met through Art’s work. Her greatest love was her family. She was keenly interested in activities, stories and accomplishments of her children, grandchildren and great grandchildren. She will be missed by all who had the privilege to know her.

Friends and family will be received at the Gilbert MacIntyre & Son Funeral Home, Hart Chapel, 1099 Gordon St., Guelph, on Sunday, February 9, 2020 from 12 – 1 p.m. followed by a service in the chapel at 1 p.m. Guest are invited to a reception afterwards.

As expressions of sympathy, donations to Canadian Cancer Society or Diabetes Canada would be appreciated by the family. Donation cards are available at the funeral home 519-821-5077 or online at www.gilbertmacintyreandson.com
Read Less

We encourage you to share your most beloved memories of Mary here, so that the family and other loved ones can always see it. You can upload cherished photographs, or share your favorite stories, and can even comment on those shared by others.

Posted Feb 08, 2020 at 11:18am
Our deepest condolences on the loss of your beloved Mom. Although we haven’t seen you in many years we have many fond memories of when you lived in Orangeville across the road from Art and Anna. Thinking of you. Much love Wayne and Linda Cornelius.
Comment Share
Share via:
HS

Posted Feb 07, 2020 at 07:34pm
Please accept our most heartfelt sympathies for your loss... Our thoughts are with you and your family during this difficult time.

Flowers were purchased for the family of Mary Hill. Send Flowers

Posted Feb 07, 2020 at 09:04am
Mary was a caring nurse and co-worker She was by my side the night my son was born in Dufferin Area Hospital RIP
Comment Share
Share via:
HS

Flowers were purchased for the family of Mary Hill. Send Flowers

Posted Feb 05, 2020 at 08:34am
Sharon, Sue, Doug, Hugh, and Colleen,
With fondest memories of Aunt Mary, I offer condolences from the Zahorodny family. 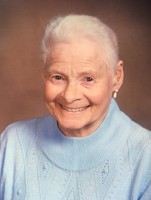