To share your memory on the wall of Mary Kosty, sign in using one of the following options:

Mrs. Mary Kosty passed away peacefully at The Village of Riverside Glen on Thursday September 17, 2020 at the age of 91. Beloved wife of the late Stan Kosty (2009). Predeceased by her parents Peter and Albina Wor... Read More
KOSTY, MARY ELIZABETH

Mrs. Mary Kosty passed away peacefully at The Village of Riverside Glen on Thursday September 17, 2020 at the age of 91. Beloved wife of the late Stan Kosty (2009). Predeceased by her parents Peter and Albina Woronka, siblings Teresa and Ray Lapinski, Mike and Winne Woronka, Jennie and George Beitz, Stanley Woronka, nephew Bobby and niece Nance.

Mary is survived by her brother-in-law Richard and his wife Lillian Kosty. Dearest aunt of Peter, Chrissie, Francine, Michael, Lisa, Peter, Joani, Rayme, David, Teri, Beth, and Michael. Special great aunt of Lindsay, Joshua, Reuben, Jonathan, Amanda, Matthew, Michael, Jolene, Laura, Corey, Niki, Ryan, Mickey, Nikki, Robyn, Ian, Evan, Ilijana, Kosta, Johnathan and Andrew. Also survived by many great great nieces and nephews.
Aunt Mary was born in Guelph but moved to Windsor when she married Stan in 1964 where she enjoyed many years with Stan. After his death in 2009 she remained in Windsor until 2014 when she had a desire to return to her home town. She first lived at the Royal on the Gordon and then moved to Riverside Glen Emma unit and then to her final home on the Arthur LTC unit which she was known as Aunt Mary. The family would like to thank Dr Kennedy, Dawn, Reza, Lucy, Jackie and all the team on the Arthur unit for the compassionate care that they showed Aunt Mary over the last few years, it was a comfort to the family knowing she was well taken care of.

Resting at the Gilbert MacIntyre and Son Funeral Home, Dublin Chapel, 252 Dublin Street, North, Guelph. A private funeral mass will be held at St. Joseph’s Church, 409 Paisley Road, Guelph. Interment at Heavenly Rest Cemetery, Windsor. If so desired, memorial donations to the Ronald McDonald House would be appreciated by the family. On line donations and condolences can be made at
www.gilbermacintryandson.com
Read Less

Receive notifications about information and event scheduling for Mary Kosty

Donations are being accepted for: RONALD MCDONALD HOUSE CHARITIES.

We encourage you to share your most beloved memories of Mary Kosty here, so that the family and other loved ones can always see it. You can upload cherished photographs, or share your favorite stories, and can even comment on those shared by others.

Posted Sep 23, 2020 at 02:52pm
My deepest sympathies go out to Mary’s family. I have known Mary for 55 years. We worked together for 25 of those years. She was a good person and a hard worker. We shared many good memories together. God bless you Mary and may you rest in peace with Stan.

Posted Sep 22, 2020 at 08:36pm
Mary we know you are at peace and with your love Stan Kosty. You will always have a special spot in the hearts of the Smith Family in Windsor for being a special and dear friend to our late mom Rita Smith. The two of you were inseparable and spent many hours playing the Hand and Foot card game on Saturday evenings after attending Mass. We enjoyed driving you to Guelph to visit your sister and you were very gracious putting up with our Labradoodle Angel in the car. Rest in Peace Mary.
Forever in our Hearts!
Jim and Carmen Smith

Posted Sep 21, 2020 at 07:46pm
Aunt Mary was born in Guelph on November 26, 1928, the youngest of 5 children; she lost her father at the age of 6 months. She along with her mother and other siblings had a hard but good life trying to make ends meet. We would often hear stories of how they had to search the whole market for the cheapest eggs only to end up where they began. The three sisters, one being my mom, would always argue about who had to take the cow to pasture. When Aunt Mary moved back to Guelph she shared the story that when she had to walk the cow back home, she would always hit the cows tail when it went up because she did not want to clean up any mess. When she got back home, Gramma also wondered why the cow wouldn’t give her any milk; Aunt Mary said she had no clue either. Before moving to Windsor she worked at the pickle factory which I found out from Aunt Mary was the Matthew Wells pickle factory and also at Leland Electric. During my visits with her after returning to Guelph, she also shared with me on how she meet Uncle Stan and how Uncle Stan wanted to adopt a child as they couldn’t have their own, but she was afraid she would not be a good mother. She was a very loving aunt so I am sure she would have been a good mother as well. We all have fond memories of our family visiting them every Labour Day weekend and watching the Jerry Lewis Telethon and taking us places in Windsor and Detroit when we visited. She and Uncle Stan also visited Guelph for holidays, sharing time between her nieces and nephews and his. She liked to play games and cards, and taught us new card games, although it took us awhile to understanding the rules. She was very generous and always remembered birthdays. She was also always looking for bargains and deals and often bought things on sale that she wouldn’t be able to use before the expiry date. In 2006, I took her with me to go to her sister Teresa 90th birthday in Alaska, we had to take a lot of Eatmore bars because Aunt Teresa loved them and you could not get in the USA, and we took a lot of Alaska salmon as well as it was apparently cheaper in Canada than Alaska.
Over the years we have many enjoyable times with Aunt Mary and she will be missed. When she moved to Guelph we thought we would have many more but this was short lived as she was hit by failing health. The last 2 and half years we were not sure if she even recognized us, and she survived on chocolate milk and resource. Even though Aunt Mary may have not know us we knew her and we loved her. 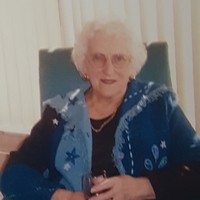 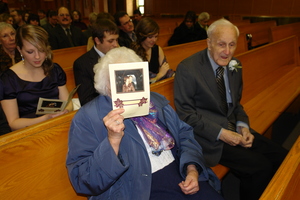