To share your memory on the wall of Mr. Nick Dodd, sign in using one of the following options:

Provide comfort for the family of Mr. Nick Dodd with a meaningful gesture of sympathy.

Nick grew up in Kenilworth, England. He was an All England level Cricket and Rugby player. After marrying in 1980, Nick and Shona left for Canada, sight unseen and immediately fell in love with this country. Professionally, he was a corporate banker in the UK and continued this career path in Canada. Due to his love of aviation through his father, a Lancaster Bomber Pilot in WWII, Nick changed his career path and soon became a leader in the aviation field, buying and selling jet engines into the commercial aviation marketplace throughout the world.

Nick was always a devoted lover of sports and was instrumental in organizing the first international indoor cricket match held at the SkyDome. Over 40,000 people attended and a record donation was made to the United Way. Nick took great pride in his boys pursuing their chosen sport of basketball, as they did so on the international stage. Nick was his own man and didn’t suffer fools gladly, but also believed in giving credit where credit is due. He will be greatly missed by his family and friends the world over.

Friends are invited to meet with the family at the Gilbert MacIntyre & Son Funeral Home, Rockwood Chapel, 117 Guelph St., Rockwood, Ontario on Saturday, July 20th, 2019 from 5-7pm. In lieu of flowers, memorial donations can be made to the Toronto General & Western Hospital Foundation (Transplants). A celebration of life will be held at a later date for close family and friends. Online donations and condolences can be made at www.gilbertmacintyreandson.com.
Read Less

Donations are being accepted for: TORONTO GENERAL & WESTERN HOSPITAL FOUNDATION.

We encourage you to share your most beloved memories of Mr. Nick Dodd here, so that the family and other loved ones can always see it. You can upload cherished photographs, or share your favorite stories, and can even comment on those shared by others.

Posted Nov 01, 2019 at 01:39pm
I have just received this sad news via cricket club news
Thoughts are with family and Nick will be remembered fondly
Doddy as we called him was a great cricketing colleague and a personal social fund
There was Nick Robin Burke and myself competing for two first team opening bowlers selection however we all ended as great friends and spent numerous happy hours in joint company
Goodbye to Nick but memories will remain with me always
Love
Nick(Jimmy)Andrew

Posted Sep 26, 2019 at 08:55am
Nick was a member of Kenilworth Cricket Club in England for many years in the 1970's onwards before he emigrated to Canada. We have just learnt of his passing. Numerous players at Club will have played cricket with him and I understand that he was the 'life and laughter' at the Club and will be sadly missed. Please will you pass on the Club's condolences and thought's to Nick's family please. Andy Smith, Hon. Secretary, Kenilworth Cricket Club
Comment Share
Share via:
HS

Flowers were purchased for the family of Mr. Nick Dodd. Send Flowers

Posted Jul 18, 2019 at 07:00pm
Our deepest condolences to Shona, Kyle, Logan. Nick you will be missed dearly from the staff at Guthro's No Frills, Acton, Ontario
Comment Share
Share via:
BS

Posted Jul 16, 2019 at 06:32pm
I was at school with Nick at Henry V111. Same year ,same form . He was a great cricketer!. We kept in touch on face book. He was clearly a lovely family man with family values and this sad news shocked me to the core. I'm so very sorry for you all. My sincere condolences. Brian Sanzom, Warwick, UK.
Comment Share
Share via:
H

Thinking of you Shona ,Kyle and Logan. Nick was a lovely man and I have fond memories with you all - take care, my thoughts are with you all at this very sad time. Lots of love Helen and family, Ulverston, Cumbria 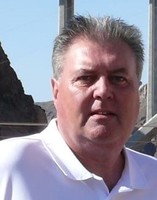