To share your memory on the wall of Pat Martin, sign in using one of the following options:

She was known as a woman of style and grace, intelligence, drive and strong will, a perfectionist, and the consummate host. Born in Mexico City, she moved all over South America until coming to Canada to learn French in high school. Mastering that in just six months she thus became trilingual. At University of Ottawa she was crowned "Frosh Princess" (hard to imagine these days) by John Turner. Of that she remembered his sparkling blue eyes as well as her empire waist, emerald green gown.

Undecided about the future she took various summer jobs, including selling swampland in Florida before applying to be a flight attendant. That turned out to be a "career" of 16 years. On vacation in New Zealand, and still undecided about her future, she witnessed deer farming, and thought "I can do that". Twelve months later after several intense university courses, city girl became farm girl. She managed the business for 17 years, was a founder of the deer farmers association and 3 time president. She worked with the University of Guelph on an experimental AI program for deer. Pat successfully lobbied the Ontario Government on behalf of the industry right up to the Premier. Her reputation grew and she was an invited speaker at conferences as far away as Australia.
Retiring from farming Pat turned to gardening to satisfy her creative and artistic urges. She created a spectacular landscape which was featured in a few gardening magazines.

She took interest in environmental causes, hosted a garden fund raiser for Elizabeth May, and worked behind the scenes on Mike Schreiner's campaigns. She loved to travel, to explore, to learn, visiting 6 of the 7 continents – from underwater in Micronesia, to hiking at 15000' in the Andes, to Europe and Asia. Nature, history, and culture were the main goals… rarely a beach. Pat always wondered what she was going to do when she grew up. Unknowingly perhaps, Pat found it: always finding a new challenge, learning and mastering it.

Her beauty and grace and will were her hallmarks.
To quote a close friend: "That woman! She pushed. She demanded. She argued. Not always to win… not everybody knows that. Not to win. To learn. And when she smiled. Oh …when she smiled"

If you would like to remember Pat in some way, please consider: The Groves Memorial Community Hospital, a cancer charity, an environmental cause, or simply a good deed in your community. Online donations and condolences can be made at www.gilbertmacintyreandson.com.
Read Less

Receive notifications about information and event scheduling for Pat Martin

Donations are being accepted for: GROVES MEMORIAL COMMUNITY HOSPITAL FOUNDATION.

We encourage you to share your most beloved memories of Pat Martin here, so that the family and other loved ones can always see it. You can upload cherished photographs, or share your favorite stories, and can even comment on those shared by others.

5 trees were planted in the memory of Pat Martin

Posted Apr 25, 2021 at 05:18pm
I had the pleasure of knowing Pat for the years that she taught French to my sons. We shared many lovely conversations. She will be missed greatly.

3 trees were planted in the memory of Pat Martin

Par was a dear colleague ,a classy lady with a cosmopolitan personality that made her feel at home anywhere .She was indeed a beautiful human being. My deepest condolences to the Family .Ben Mattiuzzo .(Air Canada IFS from 1973/2008)

Posted May 04, 2021 at 05:13pm
I met Pat and Peter through Green Party activities. There was always interesting conversations and some laughs. I was surprised and saddened to hear the news. My thoughts are with Peter and Pat’s family - may her amazing life bring lots of wonderful memories and comfort. Best, Michelle (Bowman)
Comment Share
Share via:
AD

Posted May 02, 2021 at 11:12pm
PAT WAS MADE OF JOY AND LOVE.PAT WAS THE MOST BEAUTIFUL ROSE IN HER FLOWER GARDEN...NATURE GOOD FAIRY. PAT EMBRACED THE WHOLE WORLD WITH COMPASSION. 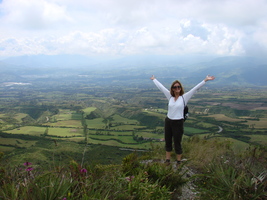