To share your memory on the wall of Paul \"P.K.\" Karn, sign in using one of the following options:

Provide comfort for the family by sending flowers or planting a tree in memory of Paul "P.K." Karn

Provide comfort for the family by sending flowers or planting a tree in memory of Paul "P.K." Karn

Print
KARN, Paul “P.K.” David – It is with heavy hearts that we announce the sudden passing of Paul David Karn, in his 57th year, in a single vehicle accident in Bruce County on Saturday, December 14, 2019.

Paul was born and raised in Gu... Read More
KARN, Paul “P.K.” David – It is with heavy hearts that we announce the sudden passing of Paul David Karn, in his 57th year, in a single vehicle accident in Bruce County on Saturday, December 14, 2019.

Paul was born and raised in Guelph and was known to many as P.K. He was an exceptionally hard-working and dedicated employee at Cascade Canada, Ltd. His passions and interests included tinkering on his 1954 Ford Mercury Custom Car, listening to the Tragically Hip or Hawksley Workman and Marillion, canoeing and fishing in the Nottawasaga River with fellow brothers Bones and Batman, photography, doodling, acquiring antiques and quirky collectables, especially his Batman collection. He loved mountain bike riding and gazing into the night sky with his telescope and he loved spoiling his cat.

Paul will forever be loved and missed by his wife Wendy (née Hannan) of 20 years. Dear and loving father of Crystal Gray and Carmella Thompson and supportive step-father to Jeffrey and Jason Thiessen. Paul was a loving grandpa to Gabriel, Lily and Tyler Gray and Cooper and Hadley Thiessen. Survived by his brothers Joe and Randy Karn and by his sister Kim Cutting. Uncle Paul will be greatly missed by nephews Brad (Brittney), Ryan, Taylor, Nicholas, Michael, Jason, Little Joe, Gord, Gary, Rick and his nieces Melissa (Mitch) and Jennifer.

Paul will be fondly remembered by Cary and Catherine Alexander and David and Robbie Lowther and countless friends and co-workers. A special thank you to the First Responders who were on the scene in Bruce County

Friends are invited to the Gilbert MacIntyre and Son Funeral Home, Dublin Chapel, 252 Dublin Street, North, Guelph on Sunday, December 22, 2019 from 11 a.m. – 2 p.m. A funeral service will be held in the funeral home chapel at 2 p.m. Cremation has taken place. In lieu of flowers, donations to McMaster Children’s Hospital, Hamilton—Pediatric Intensive Care Unit, would be especially appreciated by the family. Cards are available at the funeral home (519-822-4731) condolences may be sent to www.gilbertmacintyreandson.com
Read Less

Donations are being accepted for: McMaster Children's Hospital.

We encourage you to share your most beloved memories of Paul "P.K." Karn here, so that the family and other loved ones can always see it. You can upload cherished photographs, or share your favorite stories, and can even comment on those shared by others.

Posted Dec 19, 2019 at 07:03pm
With heartfelt sympathy. We will hold him forever in our thoughts and memories.

Posted Dec 19, 2019 at 07:08am
I am thinking of you and your family during this difficult time. My thoughts and prayers are with you.
Comment Share
Share via:

Posted Dec 18, 2019 at 09:04am
Paul was always such a happy guy when ever i seen him, great friend to the Williams family
everyone always looked forward to seeing him, he would always bring a smile to your face.
He will be missed. Many prayers to his family.

Posted Dec 18, 2019 at 08:56am
Wishing you peace to bring comfort, courage to face the days ahead and loving memories to forever hold in your hearts.

Posted Dec 18, 2019 at 05:59am
P.K. brought joy to our lives. He was happy spending time in our home. The loss of our friend P.K. has left a void. "Perhaps they are not stars in the sky, but rather openings where our loved ones shine down to let us know they are happy." May you find peace P.K.
Sheena and James
Comment Share
Share via: 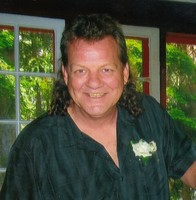