To share your memory on the wall of Robert \"Bob\" Connelly, sign in using one of the following options:

Provide comfort for the family by sending flowers or planting a tree in memory of Robert "Bob" Connelly.

Provide comfort for the family of Robert "Bob" Connelly with a meaningful gesture of sympathy.

CONNELLY, Robert John “Bob” - It is with heavy hearts we share the passing of Robert “Bob” Connelly in his 74th year on September 8th, 2020 at home, after an incredibly brave battle with cancer.

Bob is predeceased by his mother ... Read More
CONNELLY, Robert John “Bob” - It is with heavy hearts we share the passing of Robert “Bob” Connelly in his 74th year on September 8th, 2020 at home, after an incredibly brave battle with cancer.

Bob is predeceased by his mother Wilma, father Clarence and brother Brian. Bob leaves behind his soulmate and best friend Cathy, who was at his side when he took his last breath. Survived by daughters Karen (John) Connelly, Susan (Jeff) Farrelly and Chad Connelly, beloved grandchildren David and Ella Farrelly and Liam McCracken, sister Jane Lahay and brother Tom (Rebecca) Connelly. Bob was loved by many extended family members including nieces and nephews, cousins and in-laws. Bob was a loyal friend with Dennis Holman, Jeff Hunt and Robert Davies who added colour and humour to his life until the very end.

Bob loved his pets dearly and shared that he hoped to go to doggie heaven. Being born and raised in Guelph, after high school at Bishop Mac he attended the University of Guelph for a short time and then worked as a Banker, where he caught the interest of the Guelph Police Department when he foiled a bank robbery. This led to a career as a Guelph Police Officer for 27 years where he took great pride in helping to keep Guelph safe for all. Bob especially enjoyed his time in School Safety as ‘Policeman Bob’ alongside Elmer the Safety Elephant, to his daughters’ delight, and also working at his daughters’ high school dances, much to their dismay. Bob retired in 1996 and he enjoyed retirement immensely. He continued to work, this time as a License Fee Officer with the Ontario Sheep Marketing Agency for 11 years. He enjoyed his many hobbies and being a ‘Papa’ to his precious grandchildren alongside ‘Nana’, spending time with them, chauffeuring them around town, prepping for Christmas months in advance and attending their various extra-curricular activities to cheer them on.

Over the last 20 years, Bob had many health challenges and his family started to think of him as the bionic man. He bravely fought these challenges with a smile and a positive attitude. As a four time cancer survivor, nothing slowed him down until his fifth and final battle with cancer. Bob taught us all that life is always worth fighting for, every minute of every day, to never give up hope and that the sun will rise again tomorrow. We would like to thank the many health care professionals and organizations that cared for Bob over the years: Dr. Douglas Choong, Dr. Ian Phillips, Dr. Matthew Kilmurry, Juravinski Cancer Centre, Hamilton Health Sciences, Victoria Hospital in London and St Mary’s. Bob was very grateful for the care he received at Guelph General during his last stay, calling the nursing staff on 7East ‘angels on earth’ and he kept asking Cathy to purchase Tim Hortons gift cards so he could show his appreciation and hand them out from his bedside. Thank you to Dr. Chan and the Hospitalists for the compassionate care you provided him. Bob wanted to be home more than anything, and his family had the honour of caring for him at home in his final days. Thank you to the LHIN’s palliative care service teams and compassionate care provided as we couldn’t have fulfilled Bob’s wishes to be home without them. Someday, we will meet you again in doggie heaven. Until then, we will always be holding you in our hearts.

In lieu of flowers, the family asks that donations be made to the Guelph Humane Society in his honour. In keeping with Bob’s wishes, a private family service will be held by his graveside at a future date. Online donations and condolences can be made at www.gilbertmacintyreandson.com. 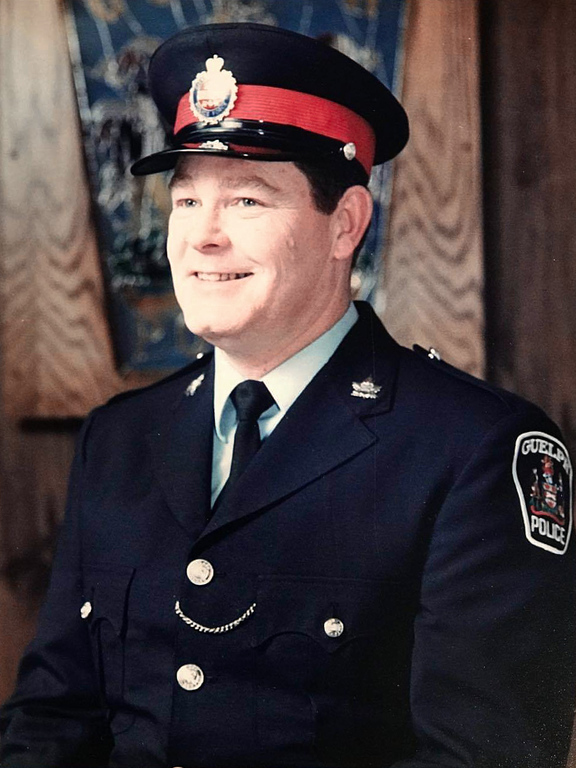 Donations are being accepted for: THE GUELPH HUMANE SOCIETY INCORPORATED.

We encourage you to share any memorable photos or stories about Robert "Bob" Connelly. All tributes placed on and purchased through this memorial website will remain on in perpetuity for generations.

Sending my sincere condolences to your family. "Constable Connelly" was a wonderful man and I remember him fondly. I met him through the safety patrols in elementary school at Victory School. He was a great mentor and always had a laugh or a smile to share. He worked with Carl Costello at the time. I'm so sorry for you loss. The world needs more people in it like him. Take good care.

On behalf of the Guelph Police Services Board, I want to express our condolences on the recent passing of Robert. Although it has been several years since he served the Guelph community as an Officer, we are always saddened to hear of the loss of one of our members. May you experience peace during this time of loss. Robert Carter, Chair of the Guelph Police Services Board
Comment | Share Posted Sep 10, 2020 at 03:27pm via Condolence
JJ

My deepest sympathies to you and your family on your loss. My thoughts and prayers are with you.
Comment | Share Posted Sep 10, 2020 at 02:53pm via Condolence
J

Dear Karen and Connelly family,
Sorry to hear of the passing of your father. On the few occasions that I visited the Connelly residents back when Karen and I were still in University both Bob and Cathy were always very welcoming into their home. I loved chatting with Bob about war planes. A fond memory of a wonderfully warm person. RIP good sir.
Comment | Share Posted Sep 10, 2020 at 12:01pm via Condolence
JR

To Cathy and family:
My deepest condolences reach out to you at this sad time. May you find comfort and peace in the days ahead.
Jean Rowland-Brown
Comment | Share Posted Sep 10, 2020 at 08:26am via Condolence