To share your memory on the wall of Mr. Ron Ormond, sign in using one of the following options:

Provide comfort for the family by sending flowers or planting a tree in memory of Mr. Ron Ormond

Provide comfort for the family by sending flowers or planting a tree in memory of Mr. Ron Ormond

Peacefully entered into rest on Monday, January 13th, 2020 at home in Guelph in his 90th year, with his wife by his side. Ronald Ormond was the beloved husband for 68 years to Grace (nee McKay). Ronald was... Read More
ORMOND, Ronald “Ron” George

Peacefully entered into rest on Monday, January 13th, 2020 at home in Guelph in his 90th year, with his wife by his side. Ronald Ormond was the beloved husband for 68 years to Grace (nee McKay). Ronald was the dear father of Randy (Kamla) of Parksville, BC, Gary (Janet) of London, ON, Brian (Yvonne) of Stratford, ON, David (Katrina) of London, ON, Mark (Lisa) of Shannonville, ON, Cosette (Scott) of Fergus, ON and is predeceased by two infant sons. Ron is lovingly remembered by his grandchildren Rachelle, Chad, Rebecca, Michael, Kristin (Alex), George, Mitchell, Brock, Olivia, Chloe, Joseph and Sofia and by his great-grandchildren Arin, Ben and Sam. Ronald is the dear brother-in-law of Doug McKay and wife Lois and Fred Soule. He will be fondly remembered by many nieces and nephews.

Ronald served 22 years in the Royal Canadian Military (Royal Electrical and Mechanical Engineers), retiring as a Warrant Officer. Upon retirement from the Military, Ronald worked at Stewart Warner and Deloro Stellite in Belleville.

Friends are invited to meet with the family at the Gilbert MacIntyre & Son Funeral Home, Dublin Chapel, 252 Dublin St. N., Guelph, on Thursday, January 23, 2020 from 11 a.m. to 1 p.m., with a funeral service in the chapel at 1 p.m. Ron will be buried at Belleville Cemetery, Belleville, Ontario. As expressions of sympathy, donations to the Guelph Humane Society would be appreciated by the family. Cards are available at the funeral home (519-822-4731) and condolences may be sent to www.gilbertmacintyreandson.com
Read Less

Donations are being accepted for: THE GUELPH HUMANE SOCIETY INCORPORATED.

We encourage you to share your most beloved memories of Mr. Ron Ormond here, so that the family and other loved ones can always see it. You can upload cherished photographs, or share your favorite stories, and can even comment on those shared by others. 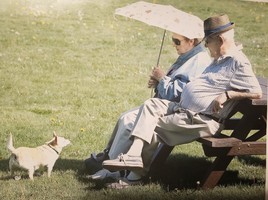