To share your memory on the wall of The Honourable Stanley Roy Kurisko, sign in using one of the following options:

Provide comfort for the family of The Honourable Stanley Roy Kurisko with a meaningful gesture of sympathy.


Stanley Kurisko spent 65 years in The Law. He was called to The Bar of Ontario on June 24, 1954, and designated a Queen’s Counsel in 1967. He was... Read More
The Honourable Stanley Roy Kurisko

As a judge, Stan was known for his capacity to make decisions and for his innovation.
Long before civil and criminal pre-trials became established in Ontario, Stan was a driving judicial force behind a civil and criminal pre-trial system in Northwestern Ontario. The result was that backlogs were eliminated and Stan was invited to sit throughout Ontario, the Northwest Territories and the Yukon. The evidence of his success can be seen in his hundreds of written decisions on a broad variety of subjects which are reported in Quick Law, Ontario Reports, Family Law Reporter and other law reports.
The quality of Stan’s intellect and his willingness to work appeared at an early age. He spent his early years with his parents in logging camps northwest of Sault Ste. Marie where he was home-schooled by his mother. At the age of seven, Stan was enrolled in Grade 2 in King Edward Public School in the Sault. He was quickly moved to Grade 5. Stan is a graduate of Sault Collegiate, Victoria College, University of Toronto and Osgoode Hall Law School (with Honours).

Stan’s ability to make correct decisions showed itself in his youth. As an executive of the Victoria College Union hosting a frosh/freshie night, he knew immediately he met first year student, Joan Skelton, he wanted to marry her. And he did. They would have celebrated their sixty-eighth wedding anniversary on October 19.
Following his call to the Bar, Stan began practice in his hometown of Sault Ste. Marie. Realizing the in-depth experience to be gained in the development of the pre-planned “model town” of Elliot Lake to service the burgeoning uranium mine, he practiced first in nearby Blind River and then moved to Elliot Lake to eventually become the resident lawyer for 20,000 people. Joan and two children joined him to reside in their uncompleted bungalow. With only two years of settled living, they soon realized the U.S. contracts for uranium would not be renewed. Consequently, Stan began building a practice in the Sault while winding up a lucrative foreclosure practice in Elliot Lake. Joan, with their four children stayed in Elliot Lake to sell their recently completed bungalow and supervise the move to the Sault.
Stan practiced in partnerships with Jim Kelleher, Terry Murphy, John Culina, Pat Fitzgerald, John Walker, and Thornley Virene. He was involved in all areas of criminal, civil and municipal litigation (jury and non-jury) representing plaintiffs, defendants, insurers, husbands, wives, the wealthy and the impecunious, regularly attending motions, taxations and Courts of Appeal in Toronto.

As a member of the Williston Committee in the late 1970’s and then the Rules Committee, he participated in formulating recommendations subsequently incorporated in Rules of Practice. He was one of two counsel, (the other being John de Pencier Wright, as he then was) in August, 1978, to argue a demonstration motion by telephone conference from Sault Ste. Marie heard by the Senior Master sitting in Toronto.
Active in community service, Stan held the office of president of both the Elliot Lake and Sault Ste. Marie Chambers of Commerce, president of the Sault Ste. Marie YMCA, and president of Ontario Association for Community Living (as it is now called). For his service to Magnus Theatre in Thunder Bay, he was designated an Honorary Lifetime Board Member.

The hub of his recreation and physical well-being was the year-round family cottage on the rugged shore of Lake Superior. There, he fired-up saunas, chopped wood, barbecued, played bridge, cross-country skied, swam, napped, hiked, worked, and interacted with family and friends while immersed in the many moods of the Lake. Winter weekends were spent downhill skiing with the family. Ever appreciative was he of the scenic drive from his home at Amethyst Harbor to the District Court House in Thunder Bay and his judicial chambers overlooking Lake Superior.

Services for Stan will be held at the Gilbert MacIntyre and Son Funeral Home, Hart Chapel, 1099 Gordon Street, Guelph, Wednesday, October 16, 2019 at 1p.m. Donations to The Myositis Organization, Hospice Wellington or Magnus Theatre would be appreciated.
Read Less

We encourage you to share your most beloved memories of The Honourable Stanley Roy Kurisko here, so that the family and other loved ones can always see it. You can upload cherished photographs, or share your favorite stories, and can even comment on those shared by others.

June and Jerry Demers sent flowers to the family of The Honourable Stanley Roy Kurisko.
Show you care by sending flowers

Posted Oct 15, 2019 at 01:56pm
Our prayers are with you and so many happy memories of our visits with you and the Judge manning the barbecue.

June and Jerry Demers purchased flowers and planted a memorial tree for the family of The Honourable Stanley Roy Kurisko. Send Flowers

Posted Oct 12, 2019 at 10:45am
Dear Joan and family,
My deepest condolences, from myself and I am positive , had Joan and Bob been here today, they would also be sending this to you.
It is devastating to lose a husband and no words seem to help when you are going through the loss of your soul mate, and best friend.
We were privileged to meet you both .
Barb Stechyshyn

Dear Joan and the entire family ; Our condolences and heartfelt wishes go out to everyone . I have great memories of the Kurisko family from the 60s back at lake Simcoe at Eve and Doug’s cottage . We all looked forward to Stan , Joan and family arriving from the Soo each summer . I remember running into Stan on a flight from Thunderbay to Toronto back in the summer of 1981 where we had a nice chat ... take care . David and Rosann Barrick 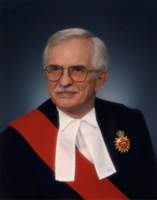