To share your memory on the wall of Tom Wright, sign in using one of the following options:

Provide comfort for the family of Tom Wright with a meaningful gesture of sympathy.

Thomas Glen Wright - We are deeply saddened to announce the sudden and unexpected passing of Tom Wright on January 18, 2020. He is survived by his wife Natalie (Laing), his children Lauren, Rebecca and... Read More
August 28, 1970 - January 18, 2020

Thomas Glen Wright - We are deeply saddened to announce the sudden and unexpected passing of Tom Wright on January 18, 2020. He is survived by his wife Natalie (Laing), his children Lauren, Rebecca and Matthew and his step-children Victoria and Zachary. He will be deeply missed by parents Donald and Sandra Wright, his brother John (Kris), sister Wendy (Lennart), as well as his many nieces and nephews.

Tom was born in CFB Cold Lake, Alberta and moved to Guelph when he was seven years old. He attended both Royal Roads Military College on Vancouver Island and the Royal Military College of Canada in Kingston, graduating with a Bachelor of Engineering. After his schooling, he returned to Guelph and had careers in IT, software development and most recently in solar technology.

Tom was a joyful competitor who loved to play games with his family. He enjoyed fishing, playing volleyball and was an active participant in his church community. He was known for his love of jokes, his positive outlook on life and his enthusiastic embrace of new experiences.

In lieu of flowers contributions may be made to the Heart and Stroke Foundation of Canada and would be greatly appreciated.
Read Less

We encourage you to share your most beloved memories of Tom Wright here, so that the family and other loved ones can always see it. You can upload cherished photographs, or share your favorite stories, and can even comment on those shared by others.

Marilyn Thomas, Sharron Dean, and others have sent flowers to the family of Tom Wright.
Show you care by sending flowers

Posted Jan 25, 2020 at 04:17pm
Uncle Don, Aunt Sandra, John, Wendy, and family; so saddened at your sudden loss of Tom. I have so many great memories of his study time here on the West Coast when he was at Royal Roads. My condolences extend to Natalie and Toms children. Posted Jan 24, 2020 at 09:24am
I am so sad to learn to that Tom has passed and offer my deepest condolences to the dear Wright family. You are in my thoughts and prayers -- today, and in the days ahead.
With love,
Kathy Schellenberg

Posted Jan 23, 2020 at 11:51am
Rowan Reynard from Rickson Ridge is very very sad for Mathew and his family. I'm sorry for your loss of your dad, Mathew.
Comment Share
Share via:
KO

Posted Jan 23, 2020 at 10:49am
Dear Wright Family, our sympathy and prayers go out to you all at such a sad time. Tom will certainly be missed. Thinking of you, with love, David and Karen Opper.
Comment Share
Share via:
C

Posted Jan 23, 2020 at 09:58am
I would like to express my heartfelt condolences to the family of Tom Wright. I remember Tom as a young boy, at church and church functions. He always had an unlimited amount of energy and was a very sweet little boy. He will be missed. My heart goes out to his family. Sincerely Candace Pavli
Comment Share
Share via: 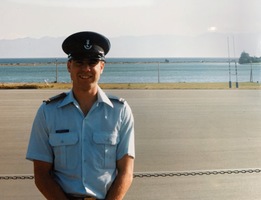