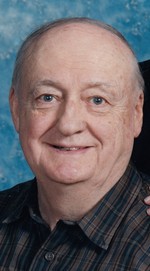 Peacefully at the Guelph General Hospital on Friday August 2, 2019, Tim Mahony, longtime resident of both the city of Guelph and Puslinch Township passed away. For many years Tim and his beloved wife Cathy lived at 7738 Maltby Rd., Puslinch. After Cathy’s passing in 2014, he moved to Royal on Gordon Retirement Home, then more recently to the Village of Riverside Glen Extended Care Home on Woodlawn Rd.

Tim was pre-deceased by his parents James and Hannah of Guelph and by siblings Sheila (Alec), Jim (Mary Pat), Ann, Patrick (Lenore) and Bill (Rose).

Tim will be missed by his many other nieces, nephews, great-nieces and great-nephews who enjoyed their time spent with Uncle Tim.

The Mahony family lived on Morris St. and Ferguson St. in Guelph and attended Sacred Heart School and church. Tim moved to Puslinch in 1968 before marrying Cathy in 1971. They were very active members of Church of our Lady Parish, the church choir and the St. Vincent de Paul Society.

Tim’s educational career included Sacred Heart School, Guelph Collegiate and Wilfrid Laurier University where he received a B.A. degree in Psychology in 1970. His achievements included winning the Bishop Ryan prize for highest standing in Christian Doctrine in all of Hamilton diocese as a 14 year old in 1947.

He was an active naturalist and gardener on his Puslinch farm, where he and Cathy hosted many family and church celebrations and corn roasts over the years.

His working career included stints at Dominion Rubber Co., Leland Electric, and Linread Manufacturing, where he and his brother Patrick played for the Linread hockey team. He was head shipper at both Linread and Ready Rivet in Bridgeport, where he finished his working career.

Tim was an active outdoorsman and fisherman, sharing many fishing trips with Cathy, to places on the Rocky Saugeen River and in Muskoka.

Family and friends will be received at Gilbert Macintyre and Son Funeral Home, Dublin Chapel, 252 Dublin St. N., Guelph on Tuesday August 6, 2019 from 2- 4pm and 7-9pm with Vigil Prayers at 4pm. Funeral Mass will be celebrated at the Basilica of Our Lady Immaculate, 28 Norfolk St, Guelph, on Wednesday August 7, 2019 at 11am. Interment to follow at Marymount Cemetery.

Those wishing to make donations in Tim’s memory may do so to The Society of St. Vincent de Paul, Hospice Wellington or to The Basilica of Our Lady Immaculate Building Fund. Cards are available at the funeral home, (519-822-4731) or donations and condolences may be made online at www.gilbertmacintyreandson.com