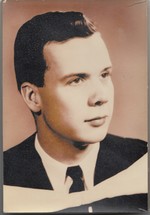 Bill died peacefully from Parkinson’s disease on August 9, 2019 at Hospice Wellington. He closed his life in the same manner as he lived it: with patience, dignity and quiet strength.

On his final day in his home of 60 years, Bill definitively declared he had had a good life. That life was full with 63 years of marriage, fatherhood to 3 children, precious time to mentor one grandson, abundance of friends, athletic determination lasting to the age of 80 walking the course at Windermere Golf Club, community groups such as the Guelph Wellington Men’s Club; volunteer work with numerous boards and quiet enjoyment of trees and birds nurtured in his backyard or Redwood.

Bill was a graduate of University of Western Ontario (BA in Honours Business Administration 1954), a Chartered Accountant (1957) and a graduate of McMaster University (Masters of Business Administration 1967). His remarkable career as a professor at the University of Guelph and Ontario Agriculture College spanned 50 years from 1959 to 2009. He was celebrated as an exceptional teacher. Honours from students included the OAC Alumni Distinguished Teaching Award and an endowment of the Braithwaite Business Scholarships by an anonymous student of Bill's. In 2009, the Braithwaite Accounting Endowment Fund was established by the university to mark 50 years of outstanding vision, dedication and commitment to excellence.

Bill was a true gentleman as well as a truly gentle man. This was never more apparent than during in his final years when he was very appreciative and thankful to the many health care workers who supported him in his home and at Hospice Wellington.

The Braithwaite family extends an invitation to all of Bill’s friends, neighbours, colleagues, former students and, most particularly, his wonderful health care teams to join a celebration of life at Cutten Fields, 190 College Avenue, East, Guelph, Ontario on Sunday, September 15, 2019 from 2-4 p.m.

If so desired, memorial donations in Bill's memory made to Hospice Wellington would be appreciated by his family.