To share your memory on the wall of Mr. Bill Tutkaluk, sign in using one of the following options:

Provide comfort for the family by sending flowers or planting a tree in memory of Mr. Bill Tutkaluk

Provide comfort for the family by sending flowers or planting a tree in memory of Mr. Bill Tutkaluk

Print
Tutkaluk, William Paul (Bill). It is with great sadness that we announce Bill's peaceful departure from this earth on the 3rd of April, 2021, in the Guelph General Hospital, surrounded by those who loved him.

Bill was, first and foremos... Read More
Tutkaluk, William Paul (Bill). It is with great sadness that we announce Bill's peaceful departure from this earth on the 3rd of April, 2021, in the Guelph General Hospital, surrounded by those who loved him.

Bill was, first and foremost, the most beloved father to Sarah and an adored 'Gigi' to Makayla and Avaiah. He was also the much-loved partner of Avril Borthiry, an awesome step-dad to John (Nicole), and a wonderful step-grandfather to Amaia and Elise. He was, as well, the cherished brother of Peter (Judy) and a friend and colleague to many.

Born on the 11th February, 1953, to parents Julia and Theodore (Ted), Bill spent most of his youth in Toronto. After attending St. Michael's College School, he went on to study at the University of Toronto, where he graduated with a Bachelor's Degree in science (B.Sc.) His love of academia and his respect for the value of education remained with him throughout his life.
He chose, however, the career path that gave him the most pleasure, following in his esteemed father's footsteps as the business owner and operator of a successful appliance repair company.

Anyone who met Bill for any amount of time was guaranteed to remember him. He had a natural way with people, taking a genuine interest in those he encountered, engaging in colourful conversations and sharing humorous tales of life's experiences.

He loved to watch hockey and was forever a supporter of the Leafs, (which says a lot about his ability to face a challenge). He loved to travel (often at speeds a little bit higher than the law allowed). And he also loved to play golf (and hardly ever cheated). Most of all, though, Bill loved spending time with his family. They gave him the most joy and made him proud every single day. He will be greatly missed.

A private mass will be held for Bill at the Holy Rosary Church, 175 Emma St, Guelph, on Friday, April 9th, 2021 at 10:30 a.m. Due to COVID restrictions, the service is by invitation only. A celebration of Bill's life, however, will be held at a future date. As expressions of sympathy and in lieu of flowers, donations to SkillsOntario would be very much appreciated. Online condolences can be made at www.gilbertmacintyreandson.com.
Read Less

We encourage you to share your most beloved memories of Mr. Bill Tutkaluk here, so that the family and other loved ones can always see it. You can upload cherished photographs, or share your favorite stories, and can even comment on those shared by others.

Nimnadi De Silva and Almonds sent flowers to the family of Mr. Bill Tutkaluk.
Show you care by sending flowers

Posted Apr 10, 2021 at 09:54am
We were so very sad to hear about Bill, and we send our condolences to you, Avril, and to your family. May you be comforted by all the wonderful times and memories that you shared with Bill.
With our deepest sympathy,
Kathy & Dave Walker
Comment Share
Share via:
A

Posted Apr 09, 2021 at 10:20am
My deepest sympathy Avril, Sarah, John and grandchildren on the passing of Bill. I don't think I ever saw Bill without a smile on his face. I hope that you will find strength and peace in the coming days in your memories of him .
Angie McLaughlin
Comment Share
Share via:
VC

Posted Apr 08, 2021 at 02:06pm
Sending love and sympathy to Avril and the family, Bill will be missed by you all beyond words but memories are a wonderful help at this time and last forever. From Viv and Serge Corvinelli
Comment Share
Share via:
HS

Posted Apr 08, 2021 at 07:42am
Hello Sarah, thinking of you and your family during this difficult time. Your dad will always be close to you in your heart. Much love, Nim & Niro 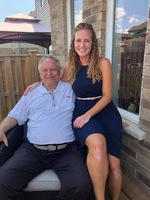 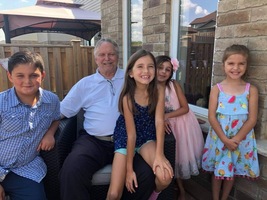 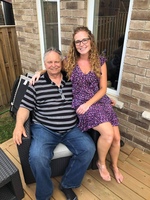