To share your memory on the wall of Mr. Zygmunt \"Ziggy\" Fendrych, sign in using one of the following options:

Provide comfort for the family by sending flowers or planting a tree in memory of Mr. Zygmunt "Ziggy" Fendrych

Provide comfort for the family by sending flowers or planting a tree in memory of Mr. Zygmunt "Ziggy" Fendrych

A funeral mass will be held at the Sacred Heart Church, 98 Alice Street, Guelph on Saturday, October 17, 2020 at 10:30 a.m. A rosary will be held at the church at 10 a.m. Social distancing rules must be observed and masks must be worn. Friends and family are invited to leave their names and information on the RSVP button or call the funeral home (519-822-4731) to attend the mass. Entombment at Our Lady Immaculate Mausoleum, Marymount Cemetery, Guelph following the mass. Online condolences can be made at www.gilbertmacintyreandson.com.

Zygmunt Antoni was born on January 17, 1926 in Warsaw to Szczepan and Lucyna Fendrych. He spent his early childhood in Warsaw and then moved to Piaseczno in 1928 where he finished his seven-grade elementary schooling in 1940. During the war, he continued his education secretly in Piaseczno and then in Warsaw. In 1942, he joined the Maczynski Battalion, part of the underground Polish resistance movement (Armia Krajowa), actively participating the Warsaw Uprising in 1944.

After the WWII, the Soviet-installed communist government of Poland outlawed the AK, forcing many to flee in order to avoid prosecution. Zygmunt left Poland in 1945 and travelled to Italy where he joined General Anders’ Polish 2nd Corps. Between 1946 – 1951, he lived in England and later immigrated to Canada. In 1964, he was granted a Canadian Citizenship which allowed him to visit Poland and his family a number of times over the next five decades. He married in Poland and sponsored his wife to Canada in the 1960s as well.

Zygmunt spent 30 years in Toronto where he initially worked as a factory worker and where he later opened a dry cleaning service. He retired from the workforce in 1982 and moved to Guelph, where he lived for the remainder of his life. He was an active member of the Polish Catholic Church in Guelph, and the Polish Alliance of Canada (Group XI), which he leaded as President for three years.

Friends and family will remember Zygmunt for his kindness, his captivating smile and his fondness for good-natured jest. Zygmunt had lived a rich and beautiful life filled with love and adventure, and while his curiosity had taken him around the world to visit many remarkable places, he had always returned to where he felt most at home: his family.
Read Less

We encourage you to share your most beloved memories of Mr. Zygmunt "Ziggy" Fendrych here, so that the family and other loved ones can always see it. You can upload cherished photographs, or share your favorite stories, and can even comment on those shared by others.

Posted Oct 15, 2020 at 07:33pm
We are very sorry for your loss. Mr. Zygmunt was an outstanding man with great passion for life and adventure.
His smile and humour always made us lough. 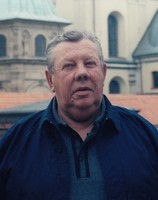